Updates On 2016 Kentucky Derby Horses: From a speed figure standpoint, no horse stands out heading into Kentucky Derby 142 on May 7 at Churchill Downs. The talented Nyquist, while undefeated and impressive in both wins this year, does not hold towering TimeformUS numbers over his rivals. The rest of the contenders offer a varied list of pros and cons. 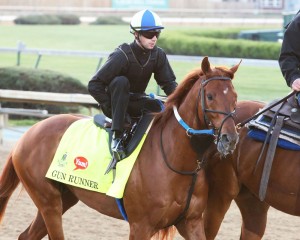 2. Nyquist (130): Reports indicate the undefeated son of Uncle Mo will breeze at Keeneland on April 22.

3. Exaggerator (126): Clockers’ Corner spotted him recently on the Santa Anita racetrack. Other than that, there is nothing new to report.

4. Outwork (120): No new updates. Some pedigree analysts might snub the 11.00 Dosage Index, but remember the formula tends to not factor in important distance influences such as Empire Maker.

5. Brody’s Cause (114): The Blue Grass winner galloped yesterday at Churchill Downs. Trainer Dale Romans finished third in the 2012 Kentucky Derby with Dullahan, who also ran as a closer and won the Blue Grass.

7. Lani (100): The UAE Derby winner continues to gallop in the mornings at Churchill Downs. No UAE Derby shipper has won the Derby, although most Derby curses eventually end at some point.

8. Mor Spirit (84): According to Tim Wilkin, the Santa Anita Derby runner-up will ship to Churchill Downs on Friday.

10. Danzing Candy (60): Trainer Clifford Sise plans to take an unusual route to the Derby, by training him at San Luis Rey Downs first in California (because their track more closely resembles Churchill Downs than Santa Anita).

12. Suddenbreakingnews (50): Like Creator, this late-closer took advantage of the Arkansas Derby pace to finish second. A horse like this seems ideal for underneath slots in a Derby superfecta.

14. Shagaf (50): After finishing fifth in the Wood Memorial, the hype on social media is almost non-existent for this Chad Brown-trained son of Bernardini.

15. Whitmore (44): Ron Moquett’s Derby hopeful ran third in the Arkansas Derby. He still lacks any route wins, which is a concern for bettors.

16. Tom’s Ready (44): Last Thursday, he breezed five furlongs in 1:01.60 at Churchill Downs. Maybe trainer Dallas Stewart (Golden Soul, Commanding Curve) can work his magic again and get this one in the superfecta.

17. My Man Sam (40): Updates are scarce on Chad Brown’s other Derby hopeful. Traffic will pose a problem for this late-runner in the Derby.

19. Trojan Nation (40): He reportedly flew back to California last week. Fans will dismiss this runner because of his maiden status, but a closer like him can blow up the superfecta.

20. Mo Tom (32): Some drama unfolded when Mo Tom briefly slipped to No. 21, but Cupid’s defection clears the way for a Derby run. Expect a couple more defections, as they happen around this time every year.