Mo Tom Needs Pace, Luck in Kentucky Derby 142: Pace will help closers in the Kentucky Derby (GI) at Churchill Downs, scheduled for May 7. In most years, the early pace for the 10-furlong race turns into a chaotic mess of quality speed horses knocking heads with each other, setting the race up for a close-range stalker or closer. This year’s expected pace looks unclear at the moment. 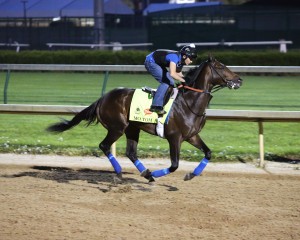 GMB Racing’s Mo Tom, a closer trained by Tom Amoss, will need a contested pace in order to unleash his usual rally from behind in the 2016 Kentucky Derby.
Coady Photography

GMB Racing’s Mo Tom, a closer trained by Tom Amoss, will need a contested pace in order to unleash his usual rally from behind. Unfortunately, with the new point system implemented a few years ago, toss-out sprinters do not get the opportunity to muck up the early fractions with blazing speed anymore. Will it matter?

In 2013, despite the point system in place, the pace collapsed partly due to Palace Malice and the failed blinker experiment. The commotion of the Derby crowd also possibly affected him. He shot out of the gate, cut through fast fractions and faded, affecting other notable names such as future Preakness Stakes (GI) champion Oxbow.

In 2014 and 2015 though, the massive collapse never happened. At least, if the pace did work against the speed horses in 2014, their demise seemed moderate compared to the previous year. Uncle Sigh and Chitu sparred for the lead and faded, but they had distance questions going into the race.

California Chrome, who pressed the two leaders, kept going and pulled clear in the stretch, before fading slightly towards the end to a winning margin of just over one length. The closer Commanding Curve finished second.

Last year, none of the top three pace horses wilted, although they already displayed high quality in previous races. American Pharoah, who pressed Dortmund and Firing Line, fought hard to take control in the stretch before inching clear for the win. Frosted, who rallied from 14th early, could only manage fourth place.

Runners with Mo Tom’s style can overcome a less-than-ideal pace scenario, but the task becomes harder. To his credit, the Uncle Mo turned in three quality efforts in his prep races this year in demonstration of his quality.

To kick off the season, Mo Tom closed from eighth to win the Lecomte Stakes (GIII) at Fair Grounds in January. Then, he ran third in the RIsen Star (GII) after checking sharply under Corey Lanerie when Bistraya drifted.

Controversy arrived in the Louisiana Derby (GI) when Lanerie had to check Mo Tom again. This time, fans were not so willing to forgive the incident, as Lanerie had the option to swing outside for the stretch drive.

In general, the perfect trip for a stalking or closing horse in a route race involves saving ground for the first half and switching out during the second turn before the final straightaway. Some horses (not all) become intimidated rallying through the inside, and switching out gives them a clear run to mow down the leaders.

Lanerie chose the inside path, which puzzled Mo Tom supporters. But, remember, retired jockey Calvin Borel used the inside to win the Kentucky Derby aboard Street Sense (2007), Mine That Bird (2009) and Super Saver (2010). What failed to work in one race might work in another situation.

Amoss sounded upset after the Louisiana Derby and reportedly kicked Lanerie off his horse in the next race.

“ … I was just puzzled as to why Corey went down to the rail. I just hope he didn’t hurt my horse,” Amoss said for the Fair Grounds press release. “I am surprised. There were other choices and I don’t understand why he did what he did. Watching this was like going to the schoolyard and watching your kid get beat up by another kid.”

Later on, Amoss cooled down and decided Lanerie would pilot Mo Tom once again in the Kentucky Derby. If nothing else, the trainer shows confidence in his jockey and hopefully Lanerie will use the trust placed in him as inspiration to not let Mo Tom’s connections down. Otherwise, pitchfork-carrying fans may come out after the race.

Mo Tom needs a bit of racing luck. Luckily, his opponents could use luck as well. While Mo Tom’s popularity and expected low-ish Derby odds make him a low-value bet for handicappers, Mo Tom holds a chance to win.