Previewing the Kentucky Oaks Starting Gate: The Kentucky Oaks has seen more horses taken out by injury, illness, or distance limitations than the Kentucky Derby this year. So far, we have seen Songbird dominate her division only to spike a fever and be taken off the Oaks list of contenders.

We have also seen one previously undefeated filly named Cathryn Sophia be removed from consideration as trainer John Servis “believes” the seven-furlong Eight Belles Stakes on the Kentucky Derby undercard would suit his filly better. However, without the main competition of Songbird, Cathryn Sophia is now a strong possibility to line up in the Kentucky Oaks starting gate.

With the prep races now over and the field looking pretty set, let’s look at how the race stands now as if it were to run this weekend. The order from first to fourteenth is merely based on points, not personal opinion rankings. 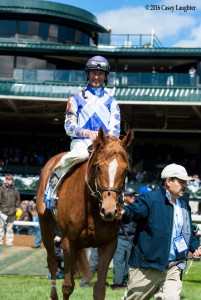 Weep No More would be the second horse in two years to come out of the Ashland and win the Kentucky Oaks if she were to do so.
Photo: Casey Laughter

Terra Promessa – This Curlin filly looks to be a major threat in the Oaks. She is bred to appreciate every bit of nine furlongs and runs with a strong extension that eats up a lot of track. She has only faced defeat once, which was in her career debut. She seemed to have a tougher race in the Fantasy when stablemate Taxable gave her a tough go and a good fight. Both fillies have made the Oaks, and both look good. Terra Promessa may be one of the better fillies we see this year. Don’t count out the Oaklawn horses!

Lewis Bay – Finally breaking through in the Gazelle, we have seen that this filly is best going nine furlongs, the distance of two of her three wins. She is bred on an incredible cross that should carry her around four turns if needed. This Bernardini filly is a main competitor, in my opinion, even if she hasn’t faced the toughest competition in New York. She should have no problem on Oaks day.

Land Over Sea – Finally breaking away form Songbird in the Fair Grounds Oaks, Land Over Sea stormed to a win that was impressive both on paper and visually. She could be a tough customer in the Oaks, especially with some of the speed signed on here if everyone runs their race. She would benefit from speed but doesn’t seem to need a lot of it. The filly that has been chasing Songbird all year finally gets away from her main competition and even provides her owners a chance to win both the Kentucky Oaks and the Derby in one weekend!

Go Maggie Go – Go Maggie Go is the only undefeated filly in the Oaks field with Songbird’s defection. However, the Kentucky Oaks will only be her third lifetime start! She jumped from a six-furlong maiden to an 8.5-furlong Grade II race. She won the Gulfstream Park Oaks in the slop over Off the Tracks and Gomo. She is short on foundation coming into this race and is possibly even shorter on pedigree as her pedigree is questionable for nine furlongs. Ghostzapper over Tale of the Cat does not exactly scream, “Send me two turns!” I wouldn’t count on her to finish first on Oaks day, but she has speed!

Cathryn Sophia – After suffering her first defeat in the Ashland, John Servis told the racing world that she would not go in the Kentucky Oaks because his filly had “distance limitations.” However, it seems that he thought his filly was not enough to face Songbird seeing as with that filly now out of the race, Cathryn Sophia is back in. If she can improve off her Ashland run and use her speed, she could be a major threat here. Many people have been saying that she has been the best filly all along, and if she can win the Kentucky Oaks, others may believe that, too.

Mo d’Amour – After winning her first stakes in the Busher Stakes, Mo d’Amour looked like a promising filly to take connections King of Prussia Stables and Todd Pletcher back to the Kentucky Oaks. However, in her next start, Mo d’Amour failed to finish better than third while Lewis Bay kicked into gear and clearly was better than the rest of the fillies in the race. Her pedigree suggests she may struggle a bit with distance, but under the right circumstances, she could be a very good racehorse. She may just need more time.

Venus Valentine – Donning a new pair of blinkers in her morning workouts, Venus Valentine has been breezing very well at Churchill Downs. In her latest work, coming on April 20, she went six furlongs in 1:11.13, the fastest of three works for that distance. She had a pace meltdown in the Rachel Alexandra Stakes and failed to make her presence felt in the Fair Grounds Oaks. If she can hone some of her speed and improve off that effort on Kentucky Oaks day, she has a live shot.

Mokat – She earned her way into the Kentucky Oaks with a third in the Santa Ysabel Stakes and a second in the Santa Anita Oaks. Considering she has been chasing Songbird in her last two starts, it may say something of her talents. However, she only has one win in seven lifetime starts which came in a maiden special weight traveling a mile on the turf at Del Mar. While she has been running well on the dirt, she is not winning. She may be better bred for the turf as an Uncle Mo filly out of a Premiership mare.

Rachel’s Valentina – With the Kentucky Oaks being her second off the layoff, she should improve. She is not running against Songbird and was able to out battle Cathryn Sophia last out in the Ashland. Her first official workout at Keeneland since the Ashland didn’t really turn any heads, but she seems to be full of energy. I like her chances in the Oaks.

Royal Obsession – This very expensive filly did not prove fast enough to catch Land Over Sea in the Fair Grounds Oaks in which she finished fourth, so she shipped to New York. There, she took on the Gazelle Stakes but was still was no match for Lewis Bay. I believe this filly needs more time to mature and might prove to be a bit slow. She is bred very well, so we know she has a future as a broodmare, but her aspirations to be a Kentucky Oaks winner may be a bit too unlikely.

Dream Dance – After a second place in the Fair Grounds Oaks, Dream Dance was sent to Keeneland where she won an allowance race on April 16. She has had good runs and bad runs in stakes competition and seems to want to run a distance. She is a daughter of Afleet Alex out of a Vindication mare, so the breeding is there. She has run nine times already with seven of those starts coming as a two-year-old. She has experience, but is she good enough?

Nickname – Nickname tried to salvage some much needed Kentucky Oaks points when she went to post in the Grade III Beaumont Stakes at Keeneland on April 17. She, however, lacked a winning fight and finished second. She won the Grade I Frizette last fall and then finished fourth in the Breeders’ Cup Juvenile Fillies. She is in the Kentucky Oaks field but has not won a race since October. Since her fourth in the Breeders’ Cup, she has finished second three straight times. Sometimes, horses just like to finish second.

Taxable – Steve Asmussen sent this filly in the Fantasy Stakes against stablemate Terra Promessa, and she did not disappoint. She has spent her entire racing career at Oaklawn, never finishing worse than second in three races. She has her spot in the starting gate but likely lacks just a bit on experience when in comparison to the rest of the field. She has a lot of pedigree behind her and should have no problem getting nine furlongs. However, she will really need to step it up to make her presence known on May 6.

The Kentucky Oaks is set to go off on May 6, 2016, at Churchill Downs in Louisville, Kentucky. The race is held annually, entering its 142nd year in 2016. The race is run on the main dirt track around two turns at a distance of 1-1/8 miles, rain or shine. The race is restricted to three-year-old fillies.

When is the Kentucky Derby?