Trojan Nation Seeks First Win in Kentucky Derby 142: Complaints about a maiden entering the Kentucky Derby (GI) on May 7 at Churchill Downs were predictable. Just last year, people became outraged to find out a horse who only broke his maiden (Tale of Verve) entered and made the also-eligible list. Trojan Nation, runner-up in the Wood Memorial Stakes (GI), will enter with an 0 for 6 record. 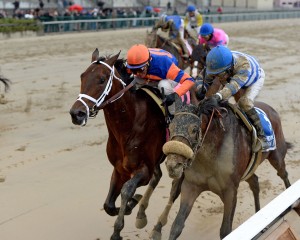 Trojan Nation (right) benefited from the Wood Memorial pace and an opening through the rail, yet failed to outfinish Outwork (left). Photo: Chelsea Durand, Coglianese

Brokers Tip won the 1933 Kentucky Derby as a maiden, as well as Triple Crown champion Sir Barton in 1919 and Buchanan in 1884. Since Brokers Tip, nine maidens tried the Derby and nine failed. In less than two weeks, Trojan Nation will either make history as the first maiden to win in 83 years, or become the 10th failure since then.

If Trojan Nation wins, the son of Street Cry out of a Summer Squall mare will accomplish the feat with the low-profile trainer Paddy Gallagher and owners Aaron Sones and Julie Gilbert. The well-bred colt owns six losses, but only finished worse than fourth once in his debut. He came from well behind in his Wood Memorial run.

Besides the fact Trojan Nation lacks any wins, other reasons exist to remain skeptical of his effort at Aqueduct and chances in the Kentucky Derby. For one, the pace of the Wood Memorial set the race up for closers.

Matt King Coal, a need-the-lead horse, and Outwork ripped through the opening quarter in 22.91 seconds for the nine-furlong race. The subsequent fractions slowed down each quarter too, meaning the race catered to closing styles even though Outwork put away all challengers and held off Trojan Nation at the end.

Trojan Nation benefited from the pace and an opening through the rail, yet failed to outfinish Outwork.

Supporters might point to how the Kentucky Derby historically features a moderate to fast pace, but Trojan Nation must overcome traffic issues too and the pace scenario appears murky at best. In past years, toss-out sprinters would help closing horses, but the new point system excludes sprint prep races.

Despite the negatives, Trojan Nation offers his supporters a faint glimmer of hope.

According to an article in the Courier-Journal, “He’s really bred to go the Derby distance, and it was really always mine and Paddy’s plan to get him to the Derby starting back in March of last year,” Sones said.

Of course, Street Cry sired 2007 Kentucky Derby champion Street Sense, as well as numerous other champions who liked running longer distances. On the bottom side, Summer Squall, a sibling to A.P. Indy, finished runner-up in the 1990 Derby and captured the Preakness Stakes (GI) two weeks later.

The second part of the quotation simply shows the confidence displayed in this horse by the connections.

Whether or not Trojan Nation can win, this runner absolutely belongs in the race. The connections nominated him and he earned the points to place high enough in the standings. If Trojan Nation can compete in a Grade I stakes race and come within a head of defeating Outwork, and if Outwork runs on May 7, then Trojan Nation belongs.

In all likelihood though, Trojan Nation’s limit is the bottom of the superfecta, if he reaches any kind of ticket at all for bettors. His presence certainly brings intrigue and fun as the maiden contender, and through experience and maturity 3-year-old horses can change overnight, but he must improve … by several lengths.