My Man Sam Another Closer in Kentucky Derby 142

My Man Sam Another Closer in Kentucky Derby 142: Racing fans love closers when it comes to the Kentucky Derby (GI) at Churchill Downs, scheduled for May 7 at the distance of 10 furlongs on dirt. More than a few handicappers advocate choosing the horse with the best closing kick in the Derby prep races, because they believe a good closer will more readily adapt to longer distances. 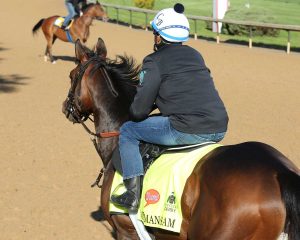 Supporters of My Man Sam will get no break in the 2016 Kentucky Derby with his value because of the well-known trainer Chad Brown and jockey Irad Ortiz Jr.
Photo: Coady Photography

Some (including this author) would argue with the logic though. Plus, supporters of My Man Sam will get no break with his value because of the well-known trainer Chad Brown and jockey Irad Ortiz Jr.

My Man Sam’s past record shows a steady progression.

Forget the career debut, where My Man Sam finished fifth by over eight lengths at Aqueduct. The reasonable handicapper will forgive a horse’s first career start.

In My Man Sam’s second start a month later, he switched to a route distance and won by eight lengths from behind. According to the chart comments, he went “clear to the finish in hand in the final jumps.”

The next start proved more difficult, as he had to face Matt King Coal and Mo Power, two respected runners. Matt King Coal ended up setting an uncontested lead and stayed there, while My Man Sam did his best to close for second. If nothing else, the effort gave Brown enough reason to test My Man Sam in the Blue Grass Stakes (GI).

My Man Sam finished runner-up again at Keeneland, this time to the horse-for-course Brody’s Cause. Ortiz, who also rode stablemate and fellow Derby contender Shagaf, was given a choice of Derby mounts by Brown.

“I left it up to him and his agent what they wanted to do,” Brown said. “In their opinion, for this particular race, they chose My Man Sam because his prep race was better.”

Ortiz also prefers to ride a patient kind of race, which makes him a suitable fit for My Man Sam’s come-from-behind style. He can let him drop back from the bumper-car madness once the gates break open and make a late run.

Pace handicappers might point out though how the Blue Grass collapsed, meaning the flow of the race favored a horse with My Man Sam’s running style. In fact, the first three finishers were 11th, 13th and 10th after a half mile.

The absence of toss-out sprinters (because of the point system) hurts horses such as My Man Sam too. While the need-the-lead Danzing Candy could help set the race up, other jockeys may chicken out from pressing the expected pacesetter. In today’s racing world, no one is surprised when speed horses are tugged back early on.

One last concern is Brown’s winning percentage in Grade I races on dirt. Wavell Avenue won the Breeders’ Cup Filly and Mare Sprint (GI) last fall for Brown, but for whatever reason, he finds more success in Grade I turf races.

My Man Sam will attempt to give Brown another Grade I dirt victory soon. Like most horses in the race, he has a chance, although no one is rushing to empty their wallets either. Study the pace scenario and make a decision.