Tom’s Ready Can Light Up Kentucky Derby 2016 by Reinier Macatangay: Bettors are steadily recognizing trainer Dallas Stewart’s ability to prepare a horse for the Kentucky Derby (GI). The man finished second twice with Commanding Curve in 2014 and Golden Soul in 2013, both at generous odds. The pair of runners were closing horses too, such as his new Derby hopeful named Tom’s Ready. 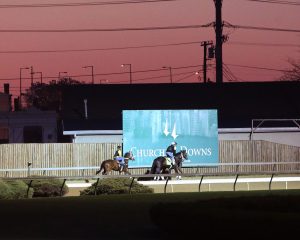 If Tom’s Ready can win on May 7 at Churchill Downs, he will give Stewart his first lifetime Derby win out of six tries. Photo: Coady Photography

If Tom’s Ready can win on May 7 at Churchill Downs, he will give Stewart his first lifetime Derby win out of six tries. He also finished second in last year’s Preakness Stakes (GI) with closer Tale of Verve. Despite gaining a reputation as a trainer who places second in these kinds of races, he remains adamant about entering to win.

“We’re going for the win,” he said. “We’re not here to participate. We’re going for the money. This is the situation. I’m trying to win it, and if he’s good enough, he’ll win it, because he’s ready. So forget all about this ‘Let’s just be in the damn race.’ That’s not what I’m all about.”

When Tom’s Ready competed in the Lecomte Stakes (GIII) at Fair Grounds back in January, he made a nice rally around the turn and had dead aim on the lead. Unfortunately, Mo Tom made his move as well and won decisively.

Tom’s Ready tried the Risen Star Stakes (GII) one month later, which went at a quicker tempo. The chart comments note he ran “four wide around the first turn” and “five wide on the far turn and tired” to seventh place. When a hot pace occurs, the wide trip is more difficult to overcome.

In the Louisiana Derby (GII) at the end of March, Tom’s Ready received a better trip. Although he ran wide around the first turn, jockey Brian Hernandez Jr. saved ground approaching the far turn and switched out for the stretch run. The winner Gun Runner simply proved too much horse for Tom’s Ready.

Perhaps Stewart will present a different horse on Derby Day. Two of the workouts since the last race are noticeably fast. For example, on April 7 he breezed a “best out of 15” four furlongs in 47.60 at Churchill Downs. Three works later, the son of More Than Ready went five furlongs in 59.60 seconds for the third best time out of 53 horses.

“It’s a horse race, and you need to be ready for it. That’s why the works have been stiff,” Stewart explained. “It’s just been steady and strong the whole six weeks.”

Fast works, rather than slow, seem to help Derby contenders prepare for the grueling pace … or back when true sprinters entered the race anyway. With the presence of Danzing Candy though, anything can happen if a few other horses decide to challenge early. It is not clear if any jockeys plan to sacrifice and hook up in a speed duel.

Considering the respect Stewart is earning, it will be interesting to see if Tom’s Ready matches the 34-1 on Golden Soul or 37-1 on Commanding Curve. In all likelihood, Tom’s Ready’s odds do end up around there. Bettors hoping for a Stewart-trained bomb to finish runner-up again will collect serious money if successful.