Home » Horses We Love » Will Lani Feel Like Running in Kentucky Derby 2016?
No Comments

Will Lani Feel Like Running in Kentucky Derby 2016? by Reinier Macatangay: Pick a criticism about Kentucky Derby (GI) contender Lani. On form alone, handicappers will need to think carefully about taking a horse out of the weak UAE Derby (GII). Traditional speed figures typically are not given for Dubai races, so it becomes hard to decipher how fast Lani ran unless someone makes their own numbers. 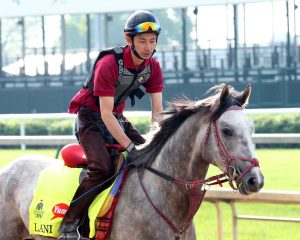 Credit the horse for showing the connections who is in charge during the Kentucky Derby morning training sessions. For bettors though, using him seems risky given the reports. Photo: Coady Photography

Plus, Lani’s training reports are bizarre. One can nitpick the slow time of his April 20 workout alone, when he breezed five furlongs in 1:06 flat at Churchill Downs (horses typically work the distance in 1:01 or 1:02).

Lani refuses to listen to instructions as well. For example, a three-furlong breeze in 37.40 shows for April 27, but the distance was planned to be longer and only shortened because he refused to accelerate until late in the work. Will this happen during the race?

“He may work six furlongs if he is happy after one lap,” Tanaka said.

Credit the horse for showing the connections who is in charge during the morning training sessions. For bettors though, using him seems risky given the reports. For the record, Lani ended up going five furlongs in a solid 1:01 flat. Trainer Mikio Matsunaga, who just arrived and spoke through Tanaka, sounded satisfied with Lani’s progress.

“The rider did a very good job. It was a nice work,” Matsunaga said. “I think he is fast enough and happy enough to run in the Derby.”

“We saw his potential on dirt as a 2-year-old and he showed a big capacity for dirt,” Matsunaga said. “The UAE Derby was a priority.”

With Tapit and Sunday Silence in his blood, it is no wonder Lani handles dirt. Tapit continues to produce numerous stakes winners on both dirt and turf. He won the 2004 Wood Memorial (GI) in his own career. Sunday Silence won the two-thirds of the 1989 Triple Crown, before failing in the Belmont Stakes (GI).

Lani also shows a good foundation for distance when looking deeper into his pedigree. On the sire side in the third generation, distance influences such as A.P. Indy and Unbridled appear. Sadler’s Wells is on the dam side.

Then again, pedigree will not help if the others horses are simply faster. Lani must also overcome the fact that no UAE Derby winner has ever won the Kentucky Derby.

“Not only do I have a runner, but one with a good chance,” Matsunaga said. “I want to change history (with regard to the UAE Derby).”

At least, the trainer is not concerned about the crowd expected on Saturday.

“ … we always have huge crowds at our races in Japan,” Matsunaga said.

Bettors will need to decide on whether to risk money on a horse who refuses to train and won a race that has never translated into a Derby victory. The odds look against Lani, but his presence is welcome and gives the Kentucky Derby an international flavor. Realistically though, if using this horse, limit him to the underneath positions.

Where is the Kentucky Derby Held? 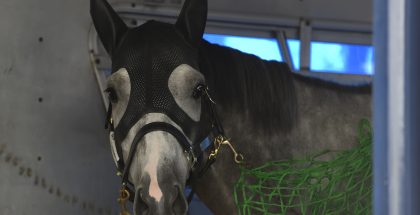