Cathryn Sophia Doing Well After Kentucky Oaks Victory: Cathryn Sophia, the newest member of the Kentucky Oaks winner’s club, poked her head outside her stall at 6 a.m. Saturday and turned her gaze to the shedrow doings of Barn 43 at Churchill Downs. Harry Harcourt, her groom, looked at her with pride and said, “There is the queen.” 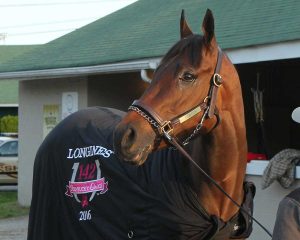 Cathryn Sophia, the newest member of the Kentucky Oaks winner’s club, poked her head outside her stall at 6 a.m. Saturday and turned her gaze to the shedrow doings of Barn 43 at Churchill Downs. Harry Harcourt, her groom, looked at her with pride and said, “There is the queen.”
Photo: Coady Photography

Twenty-four hours earlier, Harcourt, a 52-year-old native of Barbados, fretted that Cathryn Sophia, who has a propensity for getting on the muscle, particularly in her stall, would become worked-up on the walkover to the Oaks and in the paddock.

Harcourt needn’t have worried. The filly, who is owned by Chuck Zackney’s Cash Is King LLC, behaved and then ran an explosive race in Oaks 142nd, winning by 2 3/4 lengths as the second choice in the field of 14.

“She got excited a little bit (on the walkover) and I just let her hear my voice over the crowd,” the soft-spoken Harcourt said. “She knew what was going on and she was looking forward to it. Once we got to the paddock, she relaxed and I wasn’t worried anymore. It was all goodness.”
Harcourt, who began working for Cathryn Sophia’s trainer, John Servis, in February said the filly’s Oaks victory “brought tears” to his eyes.
Earlier in the week, Harcourt also had tears in eyes because of Cathryn Sophia after the filly sunk her teeth into his stomach in two places. This is not uncommon behavior for her.

“She bites me up a lot,” Harcourt said as he pulled up his shirt to display the damage, which made the visitor wince. “She lets me know when she is going to be aggressive. You know, horses talk to you, and she talks to me a lot.”

Harcourt and Cathryn Sophia’s exercise rider, Jerry Ortega, were part of a large celebration last night at Buckhead Mountain Grill on Bardstown Road that included Servis and his family and Zackney and his family.

“Amazing,” Ortega, who has worked for Servis for 1 1/2 years, said Saturday morning. “I don’t think words can explain what we are going through right now. I don’t think it registered yet. It’s definitely a good feeling, though. I’m so proud of her.”

Last night’s celebration was a bit more festive than in 2004 when Servis won the Kentucky Derby with Smarty Jones. That evening he ate pizza in his hotel room. The trainer tried to be more proactive this year in obtaining a reservation beforehand, but struck out with the two places he called earlier in the week.

“We didn’t have any place to go,” Servis said shortly after his arrival at the barn at 7 a.m. “We were trying to think of a pizza joint, but we wanted to have a couple of cocktails, and we didn’t know any pizza places you could go and have a beer, so (Buckhead) was where we went.
“We didn’t get there until after nine, and everybody kind of crashed — yawning and exhausted — it hit everybody at once.” The 57-year-old Servis, who became the 26th trainer in the 142-year history of both the Oaks and the Derby to win both races but the only one to win with one starter in each, was delighted to find out that Cathryn Sophia had a hearty appetite last night.

“I love it when Harry says, ‘Boss, I didn’t even have to clean the tub, the tub was spotless,’ ” Servis said. “That’s very good, because she has always been a little bit of a picky eater. But since the Ashland, I’m telling you, she hasn’t missed one oat.”

Servis said Cathryn Sophia would return to his Delaware Park base on Monday. The Acorn (GI) at Belmont Park on June 11 is on the radar, but the trainer isn’t wholly committing to anything yet. Now that his filly has proven she is capable of winning beyond a mile, there are more options to consider going forward.

“I don’t know . . . we’ll see how she is doing,” Servis said. “I’ll let her tell me. If she is happy, continues to do as she is or even go forward, then we will probably go to the Acorn. And the reason I say I don’t know is that after yesterday that happened to open up a whole lot of avenues. Now I’m starting to think, wow, do I even want to shorten her back up to a one-turn mile after that race. There’s a lot to think about.”
But in the meantime, Servis, who grew up in Charles Town, W.Va., is pleased to relish the fact that his Derby hardware will be joined by an Oaks trophy.

“You’re talking about a kid who grew up in a town that didn’t have 5,000 people,” he said. “To be able to win both those races is just incredible.”

LAND OVER SEA (Second) – Trainer Doug O’Neill was asked how his second-place Oaks finisher Land Over Sea was doing the morning after her stellar effort in the $1,000,000 headliner.

“Unbelievable,” the conditioner said in his usual ebullient style. “Her legs are ice cold. She cleaned up everything in her tub last night and she looks ready to go again. We’re very proud of her. She ran a terrific race.”

What might be next for the Bellamy Road filly, who moved her bankroll up to $654,000 after making her ninth start in the nine-furlong Oaks?
“We want to see how things go today,” he said. The key factor there is her stablemate, Nyquist, who is the favorite for this afternoon’s Kentucky Derby (GI). His efforts in the Run for the Roses could determine whether both horses (each owned by Paul Reddam) could be headed to Maryland, or back to California.

“We might be headed to Baltimore,” O’Neill said. “We’ll see how it goes.”

“She’s good. She’s fine,” Brown said. “I don’t know what will be next for her. We’ll just get back to New York Monday and regroup.
“I was happy with the race. She was a bit eager, but that’s just her. She’s very competitive. I thought we were in a good position. But, once they turned into the stretch and the winner took off, we were all running for second at that point. It’s just a shame that (Lewis Bay) got nailed late for second.”

The daughter of Ghostzapper was squeezed at the start, was forced seven wide on the turn into the stretch, was steadied briefly in mid-stretch before closing strongly to finish three lengths behind the victorious Cathryn Sophia, beaten a neck and a head for second money “She ran great, especially for just her third start,” said Romans, whose trainee previously had broken her maiden and captured the Gulfstream Park Oaks (GII). “She’s doing fine this morning.”

MO D’AMOUR (Fifth)/RACHEL’S VALENTINA (Sixth) – The two Oaks fillies trained by Todd Pletcher were doing fine at Barn 40 Saturday morning. Mo d’Amour, one of the longshots in the field at 37-1, had finished fifth in the 14-horse field of 3-year-old fillies, while her more heralded stablemate Rachel’s Valentina – the 5-2 race favorite – finished one spot behind her in sixth.

“Both fillies are in good order this morning,” Pletcher said.

Folks are likely to see the duo in action next in New York. They’ll be on a plane and headed to Belmont Park Monday.

WEEP NO MORE (Seventh) – Ashbrook Farm’s Weep No More came out of her seventh-place effort in the Oaks in good order according to Jack Bohannan, assistant to trainer Rusty Arnold.

“She is good this morning,” Bohannan said. “I think she will stay here for a while and then maybe give her two or three weeks off and turn her out at the farm and let her eat some green grass. She has been going all winter long.”

“She’s fine,” Howard said. “I thought she ran well. She finished eighth but only got beat 7 ¾ lengths and she was 50-1. I didn’t think that was too bad against that group of fillies.”

They appeared to have come out of the race in good order, Asmussen said as the track was about to open early Saturday morning. “They seemed fine,” he said. “They walked good.”

Terra Promessa set the pace for more than six furlongs but faded to 10th, 9 1/4 lengths behind winner Cathryn Sophia. Royal Obsession, was 11th, beaten by 10 3/4 lengths, and Taxable was last, beaten by more than 23 lengths.

VENUS VALENTINE (12th) – Rosemont Farm’s Venus Valentine, who finished 12th in the Oaks, came out of the race with plenty of dirt in her eyes but otherwise was none the worse for wear, Maurice Sanchez, assistant and exercise rider for trainer Tom Amoss, said Saturday morning.
Venus Valentine was far back all the way in the Oaks, finishing 12th, 13 3/4 lengths behind winner Cathryn Sophia.

He said it took him a while to wash it out of the filly’s eyes.

MOKAT (13th) – The Uncle Mo filly Mokat, who was in the Oaks hunt early but retreated to finish 13th of 14, had a quiet morning on the Churchill Downs backstretch Saturday. Trainer Richard Baltas reported that she was doing OK.

“She’s fine,” the California conditioner said. “She’s walking sound and I took her out for some grazing this morning. We’ll put her on a plane back to California tomorrow, then she’s going to get a little rest.”

Baltas will stay around to enjoy Derby Day, then he, too, will be on a plane Sunday headed west.