Unified Goes for Third Win in Peter Pan Stakes by Reinier Macatangay: Belmont Park’s nine-furlong $200,000 Peter Pan Stakes (GII) acts as the racetrack’s local prep for the coveted June 11 Belmont Stakes (GI). On Saturday, eight horses will compete for this year’s edition and the expected public choice will be the Jimmy Jerkens-trained Unified, despite his lack of route experience. 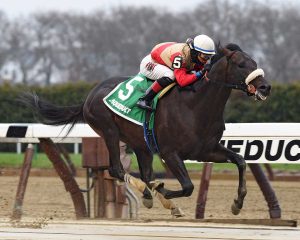 On Saturday, eight horses will compete for this year’s edition of the Peter Pan Stakes and the expected public choice will be the Jimmy Jerkens-trained Unified.
Photo: Coglianese/NYRA

With Centennial Farms posting regular updates, two-time winner Unified can easily be found on Twitter. The environmentally-minded horse helped out with Earth Day by cleaning around the barn and celebrated his birthday by kissing the camera. Perhaps the colt will start his own social media account and become the next Juba.

First, Unified must concentrate on running well this weekend. To his credit, the 121 TimeformUS Speed Figure earned in the Bay Shore Stakes (GIII) appears beyond what other horses in the Peter Pan are capable of posting.

Sprint success does not always translate into good route form though.

Luckily, Unified’s pedigree fails to raise any immediate red flags in terms of distance potential. Candy Ride works as a decent route sire and won the 10-furlong 2003 Pacific Classic (GI). As for the dam, while it would be nice to see route wins in Union City’s record, the lack of them does not disqualify her foals from winning longer races.

The on-the-lead running style Unified utilizes will not prevent the colt from going nine furlongs either, but opens up the possibility of a speed duel if another horse wishes to contest the lead. Looking at the high pace figures of Unified, any challenger would also end up sacrificing their chances with a contested first half.

If an upset happens, Governor Malibu might pull off the win. As a son of the fantastic mud-sire Malibu Moon, the Christophe Clement-trained runner will appreciate a probable wet track. His last two starts and wins both came on dirt surfaces labeled as “good.” He owns the tactical speed to lay close too.

The Bill Mott-trained Lost Iron, a son of Flatter, comes next on the priority list. Both Malibu Moon and Flatter are sons of A.P. Indy, arguably the best wet-dirt sire during his stallion career. His sons generally sire horses with the same trait. No one knows for sure until the horse tries the surface, but Lost Iron should handle the expected mud.

Other attention will fall towards Adventist, as he ran third in the Wood Memorial Stakes (GI) and arguably holds a class advantage over this field. On closer inspection, the horses he competed against at Aqueduct fared miserably in the Kentucky Derby (GI) last weekend (Outwork 14th, Trojan Nation 16th and Shagaf 20th).

The rest of the field seems questionable, but the Malibu Moon-sired Singleton, Decorated Soldier and Wild About Deb might deserve a few looks for the underneath positions. Super Czech looks like the only “throw-out” horse.

Unified may end up challenging Nyquist down the road, as Jerkens expressed interest in going down the same path as Afleet Express, who won the 2010 Travers Stakes (GI) at Saratoga. For now, he needs to prove his ability going longer, and this is a good spot to test the waters before tackling the best 3-year-old dirt routers later on.

Preakness Stakes 2016: Can Anyone Take Down the Champ?