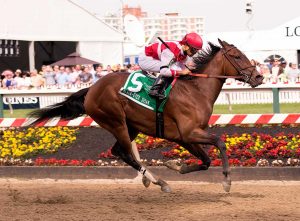 After a troubled trip in the Kentucky Oaks (GI), the Dale Romans-trained Go Maggie Go showed her true ability in the Black-Eyed Susan Stakes (GII) at Pimlico Race Course.

Originally a $200k purchase in September 2014, Go Maggie Go is owned by Mike Tarp and ridden by Luis Saez. According to a post-race interview, Tarp was ill and did not attend the race.

The daughter of Ghostzapper broke well and decided to set the pace this time, although Kinsley Kisses from the Todd Pletcher barn broke well too and sat just off her. The two went along at a moderate pace, reaching the first quarter in 23.49 seconds and the half mile in 48.83 seconds. Midnight On Oconee stalked in third from the outside.

Turning for home, Go Maggie Go slowly put away Kinsley Kisses and began to pull clear, while late threats came from 50-1 Ma Can Do It, Mom’s On Strike and Dothraki Queen. Land Over Sea spun her wheels and never showed the same kick which led to her runner-up finish at Churchill Downs two weeks ago.

Go Maggie Go asserted herself though, while Ma Can Do It inched out the other fillies for the runner-up position, Kinsley Kisses finished third and Dothraki Queen rounded out the superfecta.

“She should have been close to the lead in the Oaks … when she left clean today, I didn’t think they were going to beat her,” Romans said for the post-race interview.

Go Maggie Go improved her overall record to three wins out of four starts. In addition, Romans won the Black-Eyed Susan for the second straight year (he won last year with the double-digit longshot Keen Pauline).

She may not run on the same level as Songbird or Cathryn Sophia yet, but the year is long and Go Maggie Go has room to develop.

Looking at the 2016 Preakness Horses