(Note: Nyquist currently has a 102 degree fever, but the connections remain optimistic about still going to Belmont Park.) UPDATE: Nyquist declared out of Belmont.

Browse through most online racing discussions preceding the Belmont Stakes (GI) each year, and it will be inevitable to spot someone who believes late-closers hold the advantage in a 1 ½ mile race. This type of thinking is wrong. 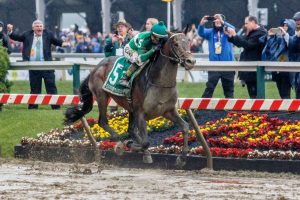 While Exaggerator holds an excellent chance in three weeks because of his talent, front-runners and tactical-speed types like Nyquist can win as well, as jockeys know they must reserve their mount and slow down the pace. In most years (although this year has been strange), the Belmont fractions are moderate to slow and give early-speed horses a chance.

Meanwhile, horses who come from the clouds sometimes lose their kick as the distance increases. Take a look at the horses who won the Belmont in recent years and their running styles.

Obviously, American Pharoah won last year in wire-to-wire style and captured the Triple Crown. American Pharoah was special, but other examples of front-running Belmont Stakes wins exist such as 38-1 Da’ Tara in 2008.

In 2014, Tonalist was part of the early mix and pressed in third before grinding his way to victory.

One year before Tonalist, Palace Malice had an up-front position in third as well and endured a hot pace to win for trainer Todd Pletcher. Fellow pace-rival Oxbow held on for second over late-runner Orb.

Union Rags settled in midpack, or fifth place, during the 2012 edition and slipped through the rail late to defeat the early leader Paynter. Disappointingly, the betting favorite Dullahan never kicked on from the back of the pack.

Back in 2011, Ruler On Ice chased the leader Shackleford in second early and held on for the win over Stay Thirsty.

Six years ago when Drosselmeyer won, he held a similar position as Union Rags in fifth place. The favorite Ice Box failed to fire after starting the race from ninth. The 12-furlong distance and moderate pace simply dulled out Ice Box’s run.

The point is, do not fall into the common theory of speed as a disadvantage in the Belmont Stakes. Closers can win this race too, but as with most other races, it depends on the pace and whether the closer handles the distance. 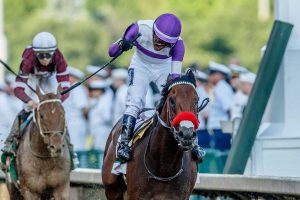 A closing style does not necessarily mean the horse improves as the race gets longer, nor does a front-running preference mean the horse excels in sprints. Think about the late-runner and 2011 Breeders’ Cup Mile (GI) champion Caleb’s Posse, who only fired his best effort around one turn. Similarly, certain speed horses excel in routes as securing the lead is easier.

This year, Nyquist (if he recovers from his fever) and Exaggerator will vie for favoritism on June 11. Nyquist likes to run either on the lead or press the pace. Exaggerator prefers to close from behind. It is a tough call to choose between the two classic winners. Other handicappers will analyze pedigree, which Exaggerator’s trainer Keith Desormeaux believes is key.

“My horse is a little more skewed toward distance [than Nyquist] as far as pedigree is concerned,” he said. “He’s Curlin, Curlin could run all day. He got beat a nose in the Belmont. Curlin is known in the industry as a classic producing horse. He’s out of a Vindication mare, who’s by Seattle Slew. It’s distance on top of distance. He should relish it.”

The pedigree rules change every year, but Desormeaux could be right. Nyquist’s pedigree worked for 10 furlongs. At 12 furlongs, it is fair to question him and others, as the race is at least two furlongs longer than any horse in the field ran.

In terms of running style though, staying close to the front will not give Nyquist or any other speed horse in the Belmont Stakes a disadvantage if the history of this race is any indication … unless another pace meltdown occurs. 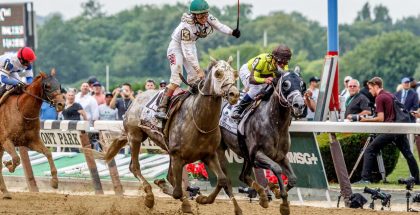 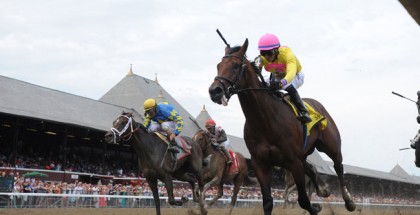 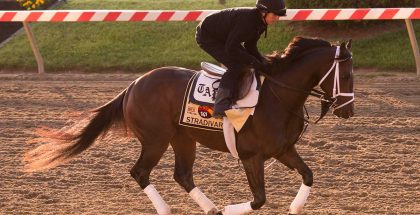