Home » Horses We Love » Will Beholder Hold Off Stellar Wind in Vanity Mile?
No Comments

Will Beholder Hold Off Stellar Wind in Vanity Mile? 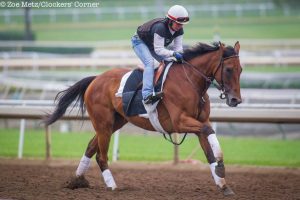 The Vanity, featuring Beholder, has been carded as the seventh race on an 11-race program. With first post time at 2 p.m., approximate post time for the Vanity Mile is at 5 p.m. PDT. Photo: Zoe Metz

Beholder hopes to build on the effort this Saturday at Santa Anita again in the $400,000 Vanity Mile (GI), when she faces a small field of six or seven. In all likelihood, fans will not be disappointed when the race ends.

Besides the 225-day layoff, Beholder had a few other problems during the Adoration. For one, she broke awkwardly. Once the mare straightened out under Gary Stevens, the inside horses forced her wide into the first turn. Plus, the slow pace (24.01 and 48.25 for the first two quarters) made it difficult to earn a high speed figure.

Turning for home, Stevens did not touch Beholder, while Sheer Pleasure’s jockey was giving hard right-handed whips. Beholder finished nicely and one could not tell anything looked different from watching the video.

Off the layoff, a low-ish speed figure is forgivable, and tackling Beholder will be a difficult task for the field.

The obvious second choice, Stellar Wind, actually has high TimeformUS numbers recorded in her last two starts (117, 119), although she enters off a 218-day break. Trainer John Sadler typically struggles with these kinds of layoffs and his recent comments in the stable notes failed to inspire confidence.

“I worked her three times now and she’s ready, but it’s her first race back so you never know how they will perform, especially against Beholder,” said Espinoza.

In conclusion, both stars possess slight flaws, but at least Beholder had a recent prep race and a reasonable handicapper can assume a move forward and victory over Stellar Wind this weekend.

Other fillies and mares are competing too.

Simon Callaghan sends out Divina Comedia and nothing in her form suggests she can pull a major upset.

Taris was entered as well, and she might be able to win if she starts, but Callaghan indicated the recent Humana Distaff (GI) winner at Churchill Downs will pass on facing Beholder and Stellar Wind.

“More likely we’ll wait until the Triple Bend ( … against males on June 25),” the trainer said.

Next to her, 30-1 longshot All Star Bub starts for trainer Jerry Hollendorfer and Rafael Bejarano will ride.

Finest City rounds out the field on the far outside, and she earned a 122 speed figure for the Great Lady M S win.

Either Beholder or Stellar Wind will prove best in the Vanity Mile though, and while Beholder holds the edge, bettors might include both just in case. Players should include the two favorites in horizontal wagers and move on.

The iconic Vanity, a fixture for fillies and mares since its inception at Hollywood Park in 1940, has been shortened from a mile and one eighth and will be run for the 75th time on Saturday. The Vanity has been carded as the seventh race on an 11-race program. With first post time at 2 p.m., approximate post time for the Vanity Mile is at 5 p.m. PDT.

Jenna and Her Two Boys: An OTTB Story 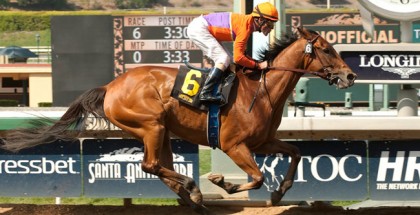 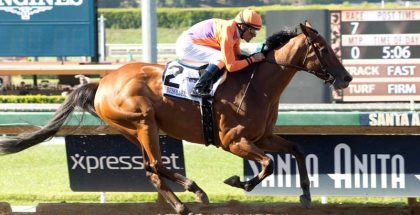 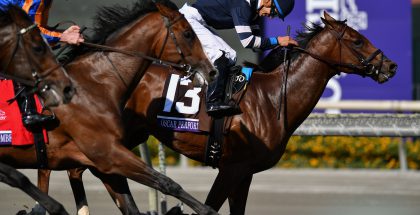