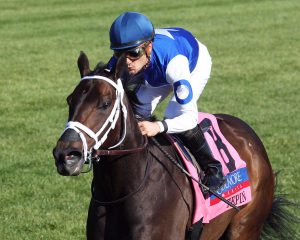 Following Tepin’s attempt to achieve international greatness at Royal Ascot, Casse will look ahead to what he hopes will be a successful fall campaign. Photo: Tepin, Jenny Wiley at Keeneland by Coady Photography

Assistant trainer Norman Casse described the move as a “typical work for her.” Churchill Downs clockers caught the daughter of Bernstein in fractions of :12.40 and :24.20 before she galloped out five furlongs in 1:01.20.

“She was moving really well,” Casse said. “She seems really happy cooling out and we’re real excited to have this opportunity to do something that could be really special. She just goes out there and does everything effortlessly. She’s just in herself and does this with little effort.

“Julien (Leparoux) was very excited about the way she went. With a horse like this where you know her so well, you would just be worried if it wasn’t her normal work and it was her normal work. Any time she works like that she seems to run well so she hasn’t given me any reason to be concerned.”

Tepin’s 5-year-old campaign is unblemished in four starts this year, punching a pair of victories at Tampa Bay Downs this winter in the Feb. 12 Endeavour (GIII) and the March 13 Hillsborough (GII) that were followed by decisive wins in the April 16 Jenny Wiley (GI) at Keeneland and May 7 Churchill Downs Distaff Turf Mile (GII).

Following Tepin’s attempt to achieve international greatness at Royal Ascot, Casse will look ahead to what he hopes will be a successful fall campaign.

“One of the appealing things about Ascot is that it gives her a race to shoot for and then coming back,” Casse said. “We knew we didn’t really want to run her during the summer time because of the heat and she doesn’t seem to do as well. We’ll look more for a fall campaign leading up to the Breeders’ Cup – maybe the ($1 million) Woodbine Mile (GI on Sept. 17) or something like that.”

Tepin will be out of her element when she ships overseas to Royal Ascot. While Casse admits this to be his biggest concern, he has faith that his champion mare has what it takes to handle it well.

“She’s got to train in a yard and she’ll have to acclimate to a different time zone,” Casse said. “It’s those types of things that we can’t control but at the same time we got to do it. A lot of our success is based on preparation and getting into a groove and doing things and doing the right things over and over again. You can’t really do that over there; there are a lot of variables that you can’t control and a lot of things that are going to be different for her. We’ll have to do things different with her and I just hope it doesn’t overwhelm her.

“I think that Tepin is a horse that is very intelligent and seems to take everything with good stride, so she gives me a lot of confidence in that regard. I think she’ll be able to handle it. She’s not worried about those types of things.”

Casse is looking forward to travelling to Royal Ascot, which will be his first trip to the historic track.

“To be a part of a special race and a special race meet is awesome – it’s an awesome opportunity,” Casse said. “But also to see different countries is something that we’re all really looking forward to.”

Tepin is scheduled to leave Churchill Downs for quarantine on Monday, and will ship to Royal Ascot the following morning.