Belmont Stakes 2016 Predictions, Picks, Plays by Kari Ward: The hyped rivalry between the Kentucky Derby winner Nyquist and the Preakness winner Exaggerator has been put on the back-shelf for the 148th running of the 2016 Grade I Belmont Stakes. Nyquist came up ill two days after the Preakness, which was heartbreaking for his connections and also for his fans. That would have really made for an incredible race. We have no rematch on the line. However, we have a nice field of thirteen 3 year-olds ready to take on the favorite, Exaggerator.
*See Updated Belmont Stakes 2016 Results, Recaps, Replays 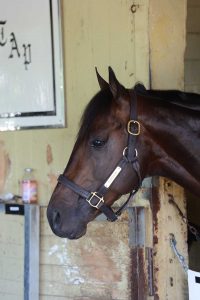 The Todd Platcher trained Stradivari is on everyone’s radar for the 148th Running of the Belmont Stakes on Saturday, June 11, 2016 at Belmont Park. Photo: Coglianese, NYRA

The 2016 Belmont Stakes is set for Saturday, June 11, 2016 at Belmont Park in Elmont, New York. The race is contested at 1 ½ miles over “Big Sandy” for a purse of $1.5 million dollars. Belmont Park has lined up the Belmont Stakes Racing Festival, which features 19 stakes with eleven Graded and six Grade 1, worth $9.6 million in purses running from Thursday to Sunday. Saturday’s card is stacked with 10 Stakes races offering up $8 million in purses. There will be live music provided by Daughtry and the Broadway musical Beautiful – The Carole King Musical as well as lots of fun festivities all weekend long.

The Belmont Stakes is carded as the 11th race out of 13 with a start time of 6:37 p.m. EST. NBC will be airing the Belmont stakes pre-show and race from 5:00 to 7:00 p.m. Turn on the tube to catch this classic final leg of the triple crown series if you can’t make it to a racetrack or your local OTB.

My handicapping buddy Sigifredo Mendoza is joining me as well as a newcomer to Twitter, Brian Arrigoni, who is the new Paddock Analyst at Canterbury Park. He has been doing a fabulous job handicapping in his new endeavor. We are each going with our top three picks and thoughts.

I’m sticking with my top choice from the Kentucky Derby this year, Destin. It looks like the Derby was his prep race for the Belmont and Todd Pletcher knows how to get a horse ready for this leg of the Triple Crown, as he has won two. He came in that race fresh of 8 weeks, he broke in at the start and was further back than they would have liked but still finished up sixth. Sneaky good in my opine. He’ll be the most fresh and if he can sit off the pace and relax, game over. I’m not digging his morning line odds of 6-1 but I’ll take it if it stays around there. He retains Castellano which is a plus from the #2 post.

Christophe Clement also knows how to get a runner home in the Belmont, winning the 2014 edition with Tonalist. He is sending in Governor Malibu who is going the same route as Tonalist. He was second to the smashing Unified in this years edition of the Peter Pan, run on this racetrack. He’s bred to stay the trip and looks to be improving. He drew the #1 hole with Joel Rosario piloting, who also piloted Tonalist. I like it and he’s not getting left off a ticket.

If I’m going with Todd Pletcher in here, I have to include the lightly race Stradivari. He ran straight from an allowance race to finishing up fourth in this years Preakness Stakes. Pretty good for stepping it up in class. He looks to be out front with Gettysburg or possibly sitting right off him. I hope he doesn’t get cooked. This horse has only race four times in his career, two of those being in 2016. I think he can stay the trip and hit the board. He drew the #5 post just inside of Gettysburg. It will be interesting to see how the pace shapes up for the race now.

With that in mind, they say pace makes the race. I’m going with Gettysburg out front with Stradivari and Destin right behind stalking. Speed kills and every now and then takes this race gate-to-wire. However, I’m not banking on Gettysburg winning. I’m having visions of the 2014 Belmont with a Pletcher/Clement finish in no particular order. I’ll be boxing my top three along with Cherry Wine who ran a very nice race in the Preakness after banging his head on the gate and started slow. He seems to be continually improving. It doesn’t hurt that he and Lani had the fastest closing fractions in the Preakness so I’m using 1,2,3,5. Win bet on Destin if he stays 6-1. Best of luck everyone. Follow Kari on twitter.

1st: Exaggerator was impressive last time winning the Preakness. Some people could argue his best performances came in the slop, but if you watch the Kentucky Derby replay, that theory falls. This time the concern is the distance because the American horses usually are not bred to run 1 ½ mile. I’m not sure Exaggerator wants to run farther than the Classic distance, so I’m trying to beat him. It is known that the closers usually suffers in the Belmont Stakes.

2nd: Suddenbreakingnews has the stamina to handle the distance.His pedigree is plagued of stamina influence, with tough names like Afleet Alex, Alleged, A.P Indy, etc. Although he had troubles in the Kentucky Derby, he was able to run late and finish fifth, just 3 ½ lengths behind Exaggerator.

3rd: Governor Malibu was running very hard and finished second in the Peter Pan Stakes, historically a prep for the Belmont Stakes. Looks like he wants to go long and his running style suits perfect for this race.His trainer, Christophe Clement,won the Belmont Stakes in 2014 with Tonalist.

With the 148th running of the Belmont, the allure of a Triple Crown winner is vacant, however the intrigue of an exceptional classic race is not. It has been quite some time since we have had a full field set to battle the 1.5 mile race. As I started to breakdown the race I typically like to look for certain things on the big days. First and foremost, I look for horses that have been successful over Big Sandy, and what I found was not overwhelming positive. Many of today’s foes have not only failed to run at Belmont but it appears many have been training elsewhere as well. Next I looked at breeding, as this is an absolutely grueling task on the biggest stage on what can be a very tricky surface. So with those in mind, let’s dive into our selections.

1st: Suddenbreakingnews comes in fresh off a troubled trip near the rail in the Kentucky Derby. As I watched his replay, the horse had a terrible beginning with virtually everyone crossing over in front of him. Despite being 27 lengths behind and only ahead of one horse, this horse never gave up and ran on for 5th place, closing in with every stride. Breeding top and bottom suggests this guy can run all day. Although he only has three wins from nine starts, he is always making up ground at the end. I’m hoping that Mike Smith will keep him closer to the front end in more of a stalking trip, and make a run around the turn to let things fall into place. The price should be fair, and breeding suggest this guy could be breaking news at the end of the day Saturday, and I’m hoping for all of 10-1.

2nd: Exaggerator is the obvious choice for many, and will likely be a single on most tickets. Rain is debatable right now, however either way the Desormeauxs will have him ready to roll. Despite a good workout over the track, I can’t come to grips with betting a 6-5 or lower breaking from the 11th post never having raced over the surface. Anytime you have a full field, and horses trying a distance for the first time, it can be tricky, and then add in typically running best from 10+ lengths off the pace. Often times when closers stretch out their closing kick is compromised, and at 6-5 or lower I will watch him fly from the back. Don’t get me wrong, Exaggerator is strictly the horse to beat and is one length away from following American Pharoah’s footsteps going for a Triple Crown. I just have too many questions to play him on top.

3rd: Stradivari could be the speed of the speed in what appears to be a paceless race. Todd Pletcher showed extreme confidence when trying this colt in the Preakness after four starts. As long as Gettysburg to the outside doesn’t go flying, Stradivari could sit a great trip and set reasonable fractions. In his two wins, once he found the front end, he drew away and hid. I think if he can find the lead nearing the stretch he could be tough to pass, with many tiring. A wise old man named my father always said, tired can’t beat tired. That’s the strategy I will use in deploying Stradivari as my third choice with an outside chance. Stradivari could be sitting on a career performance third off a layoff, and coming in much sharper after a lesson learning trip in the Preakness.

Despite 13 horses I firmly believe I can get through this leg in the pick 5 and pick 4 using five horses. While using five horses, I will be hoping to catch a price and knock out many of those who see Exaggerator as a free space.
Pick 4 horses: 1,4,5,10, 11

Don’t forget to join us at Canterbury Park with the lowest takeout in the country. As the paddock analyst, I would love to hear any feedback from any horseplayer with questions or concerns. We run Thursday and Friday at 6:30 CDT and Saturday and Sunday at 12:45. You can contact me at @MrB_CanterburyAnalyst on Twitter. Good luck, and remember: bet more win more!

Thank you Sigi & Brian for adding your picks. I hope everyone runs safe this weekend and best to all.

Seeking the Soul a Viable Longshot in Belmont Stakes

Getting a Handle on the 2016 Belmont Stakes