Getting a Handle on the 2016 Belmont Stakes

Getting a Handle on the 2016 Belmont Stakes by Laura Pugh: Just when we thought we had the Belmont all figured out WinStar Farm went and entered Creator’s rabbit, Gettysburg. 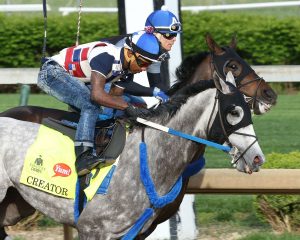 Just when we thought we had the Belmont all figured out WinStar Farm entered Creator’s rabbit, Gettysburg.
Photo: Coady Photography

Who among us doesn’t remember the fleet footed gray who sprinted the first six furlong of the Arkansas Derby? See replay below. He set such a fast pace early on that he causes a complete meltdown. The horses that were 2nd, 3rd, 4th, and 5th after the first six furlongs finished 10th, 8th, 9th, and 11th respectively. On the flip side, closers flourished, with the top three finishers coming from over nine lengths off the pace after the six-furlong call.

Before the entry of Gettysburg, the Todd Pletcher trained Stradivari looked to be the lone pacesetter in the field. Now, it looks like he will have to fight for the lead, or be forced to sit just off the pace.

That shouldn’t be an issue, as Stradivari has done just that in each of his two wins, before assuming the lead midway through. What could pose an issue is try to track a very solid pace, over a distance that he’s never been close to traveling.

Personally, I see this race unfolding very similarly to the Belmont Stakes of 2009, where Dunkirk led through opening fractions of 23.41, 47.13, and 1:12.43. That year Summer Bird was able to make up a six length deficit to win, not something that we see very often. In fact, none of the last five Belmont winners were worse than three and a half lengths off the pace after the mile call.

With a pace set up that resembles the swifter pace of 2009, we should look for a horse will be sitting mid-pack after the first mile is complete. Destin has the ability to sit back off a quick pace, and take advantage once things begin to fall apart.

Exaggerator is versatile enough to win this race. We have seen that he has an explosive kick that can be sustained for a long period, but what is also important is his versatility. He showed that dimension in the Preakness Stakes, when he began to creep closer as the pace slowed, allowing him to be with in perfect striking distance.

The rest of the field is comprised of primarily deep closers, whom have not shown the ability to adapt to different pace scenarios. Of them, the most impressive has been Suddenbreakingnews. The son of Mineshaft fires just about every time. His only issue has ever been avoiding traffic. If he can do that he could be the only closer to put pressure on Exaggerator and Destin.

Unfortunately, the Belmont Stakes has never been the easiest of jewels to predict. However, one thing looks fairly certain…. The addition of Gettysburg has added a new element of speed to the race. An element that could cause typically Belmont traditions to go topsy-turvy.

What Time Is The Belmont Stakes?