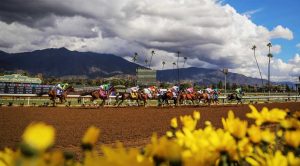 This Santa Anita Gold Cup is for 3 year-olds and up to be run over the distance of 1 1/4 miles on the dirt with the winner scoring a guaranteed paid berth to the 2016 $6,000,000 dollar Breeders’ Cup Classic.

This Santa Anita Gold Cup is for 3 year-olds and up to be run over the distance of 1 1/4 miles on the dirt with the winner scoring a guaranteed paid berth to the 2016 $6,000,000 dollar Breeders’ Cup Classic. It is one of the most important races on the calendar for older horses in California.

Hopefully, the weather cools off as California has been under a heatwave all week long. Santa Anita is throwing down the goods with the Brewfest on Gold Cup Day. Radio station KROQ is sponsoring the festival with an infield bash with over 40 craft beers on tap, some fabulous food truck eats and entertainment all day long. Slave Against the Machine will be performing as well.

We have a fine field of eight ready to run their race for a spot in the gate on the November 5th, 2016. It looks to be somewhat of a weak field of California horses. I was really hoping to see Dortmund back around this summer racing at Santa Anita but have yet to see only works from him, so I’m guessing they are targeting Del Mar.

I’m gonna take a shot with Bal a Bali going turf to dirt for the first time in his career. This Brazilian-bred 6 year-old has won four G1 races in Brazil on the grass and has won three times at the distance of 1 ½ miles, so this should be no problem. The son of Put It Back has recently been burning up some works at the track. One issue for me, he seems to be a shadow of himself after dealing with laminitis a while back, so here’s to hoping the dirt works. I think they send him from the rail and he has a great shot to take them gate-to-wire. He def has the lungs for the distance, the question will be, does he take to the dirt? Flavian Prat seems to think he should appreciate both. It’s a definite plus that he retains the mount for the Richard Mandella barn.

I have to keep riding the Hoppertunity bus as I’ve been waiting for this guy since the beginning of his career to win his first G1 race. He lost this race by a nose last year to Hard Aces and that broke my heart. Trainer Bob Baffert decided to run him in this race following his impressive workout on Saturday where he breezed 6f in 1:12.20. They were leaning toward the Del Mar meet. His last race he was third in the Dubai World Cup in March and he may need a race under his belt. Flavian Prat already committed to Bal A Bali, so Mike Smith gets the call. My big concern with him is he’s winless in three tries at 1 1 /4 miles. However, he loves this track and I can’t leave him off a ticket even though his odds won’t be great. I will not let him beat me. Can he get his first Grade 1?

I’m a complete sucker for an underdog story and Melatonin is it. After being privately purchased he was off for 18 months with EPM, Equine Myeloencephalitis. He has really thrived under trainer David Hofmans. He was a rousing 4 ¼ length winner of the Big ‘Cap on this track in March earning a 107 speed figure. Followed that up with a second after a pace duel at Oaklawn barely losing to Effinex. He looks to be sent to the front. Could there be another pace collapse with Bal a Bali up front as well? Should be interesting.

If Bal a Bali & Melatonin get cooked on the front-end in a pace duel it may set up well for a closer or stalker. Hoppertunity could get the jump but he may need the race off the layoff from Dubai. I’ll also add in Second Summer the son of Summer Bird is coming in off 3 wins and loves this track. He could take home the prize.

I’ll be using all four in the late pick 4 ending in this race. 1,2,6,7 in the last leg. Best of luck to everyone and enjoy the day at Santa Anita if you get a chance to get out there.

Hoppertunity to Hit Board Again in Gold Cup