More GI Success for Galileo with Deauville by Jordan Sigmon: Scrolling through the list of world class sire Galileo’s 50+ individual Grade/Group I winners is like a who’s who of racing. Leading that list is the unbeaten phenom, Frankel, who himself is off to a fantastic start at stud holding a 77% win rate in his first crop this year. Now, you can add another name to the list of stars by this mighty sire with Deauville’s win in Saturday’s G1 Belmont Derby Invitational. 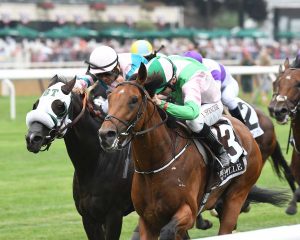 Deauville came into the Belmont Derby with only a maiden and GIII win to his name, but he did have two GII runner-up efforts in prior races.
Photo: Coglianese, NYRA

Deauville came into the Belmont Derby with only a maiden and GIII win to his name, but he did have two GII runner-up efforts in prior races. In his last outing before his US debut, Deauville was very disappointing finishing 11th of 16 in the GI Epsom Derby, 22 lengths behind the winner Harzand, who would go on to capture the GI Irish Derby in his next start.

Sitting the perfect trip just off of 60-1 longshot leader Toughest ‘Ombre for most of the race, Deauville took the lead at the top of the stretch and never looked back while holding off the furious late rally of Highland Sky. With Jamie Spencer aboard for trainer Aiden O’Brien, Deauville tracked an opening quarter in 24 ⅖; the pace slowed down a bit with the half going in 50 ⅕ but it quickened right back up for 6 furlongs in 1:14 ⅕. After a mile in 1:37 ⅕ Deauville took the lead and flew home in 23 ⅖ to register a final time of 2:00 ⅖ a neck ahead of Highland Sky with Beach Patrol 1 ¼ lengths back in 3rd.

In the post-race interviews, Jamie Spencer described Deauville as “a hard-trained horse who was ready for the day”, also adding that the colt was “full of energy and had plenty left in reserve for the stretch.” Assistant trainer T.J. Comerford, who also saddled Long Island Sound in the race, said that “the trip just worked out a little better for the winner”, and that Deauville “finished stronger, had a good setup and was left with plenty of run.”

Bred in Ireland by Mrs. F. H. Hay, Deauville is by the aforementioned Galileo by the G3P Danehill mare Walklikeanegyptian. Arguably the most productive cross with Galileo, his progeny out of Danehill line mares include the likes of Frankel, Minding, Noble Mission, Highland Reel, Teofilo, and Tapestry among others.

This win leaves many options open for Deauville, he could stay in the US and point to Saratoga, the Arlington Million, or the Secretariat for his next start; or he could ship back to Europe for races such as the King George VI and Queen Elizabeth Stakes as well as the possibility of an Arc bid later in the fall. With his running style and the talent he displayed in this race, you have to believe the GI $4,000,000 Longines Breeders’ Cup Turf at Santa Anita Park in November would be a perfect fit for this thre-year-old colt. Wherever he shows up next, Deauville figures to be a major player throughout the remainder of the year.