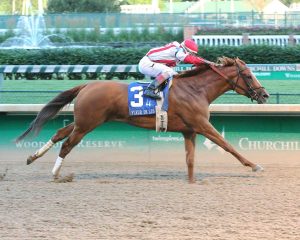 In the nine-furlong Fleur de Lis, Paid Up Subscriber closed from fourth to mow down a somewhat uninspiring field, but one containing former 3-year-old filly champion Untapable and the popular Ahh Chocolate. Photo: Coady Photography

Albert Stall Jr. trains Paid Up Subscriber, whose 8-4-0-1 record is sneakily impressive. If successful this week, the 4-year-old filly will possess a winning percentage higher than 50-percent.

In the nine-furlong Fleur de Lis, Paid Up Subscriber closed from fourth to mow down a somewhat uninspiring field, but one containing former 3-year-old filly champion Untapable and the popular Ahh Chocolate. Oddly, on paper the race looks it collapsed with all three pace horses including Untapable and Ahh Chocolate folding. But, the pace figures do not indicate the fractions went too crazy, and the track played fair.

Two races ago, she also won a one-mile optional claimer at Churchill Downs with a far less impressive 106 TimeformUS Speed Figure. The Delaware Handicap was Paid Up Subscriber’s first effort around two turns, and according to a press release, Stall Jr. thinks the extra distance will not bother her because of the pedigree.

“I got to think her last race will set her up great for the Delaware Handicap,” Stall Jr. said. “Her sire is Candy Ride who won the Pacific Classic and her broodmare sire, Street Cry, won the Dubai World Cup, so she also has the pedigree for a mile and a quarter.”

Meanwhile, I’m a Chatterbox dominated the ungraded and local Obeah Handicap, winning by over eight lengths. Trained by J. Larry Jones, this 4-year-old filly has been in the public spotlight ever since a string of stakes wins at Fair Grounds leading up to last year’s Kentucky Oaks (GI) attempt, where she finished a closing third.

I’m a Chatterbox’s TimeformUS number for the Obeah was 118, and BRIS awarded a 100 for the same victory.

Paid Up Subscriber appears faster on TimeformUS, and I’m a Chatterbox is the swifter one using BRIS, at least based on last-race speed figures. (As handicappers develop, they will realize not to judge solely on numbers.)

Jones indicated I’m a Chatterbox was capable of running faster in the Obeah.

“She opened a sizable lead and … she just started losing focus,” Jones explained. “When she gets a lead like that, you just have to keep her really focused if you want her to do more.”

The point is debatable, as it seems faulty to assume a horse who glides to victory can show more if needed.

If I’m a Chatterbox has something lacking in Paid Up Subscriber’s past performances though, it is 10-furlong experience. She ran a fine second in the Alabama Stakes (GI) at Saratoga Race Course after Embellish the Lace coasted along on an uncontested lead, although her sire Munnings might make some readers skeptical.

Out of the four remaining fillies, Mei Ling and Penwith are recognizable and offer slim chances at an upset, while Money’soncharlotte and Milaya come into this race simply overmatched.

Paid Up Subscriber and I’m a Chatterbox should provide a nice stretch battle for fans. On pedigree, the former may hold an edge and deserves a bit more consideration, but no one will be surprised if either talented runner wins.

Champagne Room To Prove Worth Saturday At Del Mar