Curlin Stakes 2016: Risings Stars and Redemption by Jordan Sigmon– This years’ Curlin Stakes, a race that has attracted the likes of Blame and V. E. Day in previous runnings, features a field full of promise for the future. It’s a race that shapes up with many storylines; There are the horses seeking to redeem themselves such as Swipe, runner-up to Nyquist will be seeking his first trip to the winners’ circle this year, Majesto will look for his first stakes win after a disappointing 18th place finish in the Kentucky Derby, Uncle Vinny, a Graded Stakes winner here last summer via DQ will attempt to win for the first time since that score, and Ready Dancer who went straight to GI company after an impressive maiden win last summer and has taken until just last month to find his way back to the winners’ circle. Then there are the up-and-comers, two of which, Connect and Gift Box both hailing from the Chad Brown barn, the other one that vaguely fits into that category is Forever D’Oro for Dallas Stewart. 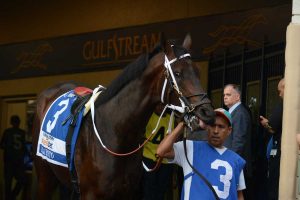 The 8/1 third choice for the Curlin Stakes is Majesto, most recently 13th in the Kentucky Derby, he will try to regain the form that saw him second to Nyquist in the G1 Florida Derby. Photo: Jordan Sigmon

Connect is the 9/5 second choice for this race and draws the rail with John Velasquez aboard for Chad Brown. A bit of a later developer, Connect didn’t debut until December 5th last year when he was third, four lengths behind Condo King and King Kranz in a 6 ½ furlong event at Aqueduct. On the shelf until May 7, Connect broke his maiden emphatically in his second start, four lengths ahead of well-bred colts in Encrypt and Bombs Away, going the same distance as his debut. In his third start, Connect faced older horses and two turns for the first time on the Belmont Stakes undercard. Tracking a moderate pace early, Connect drew clear late to win by 3 ¾ lengths. He’s bred well and he’s done absolutely everything right, though the quality of horses he’s been defeating does come into question. Needless to say, he’s looked like a good horse doing it and deserves strong merit in this spot.

To his outside in the 2-hole is longshot Forever D’Oro for Dallas Stewart with Florent Geroux aboard. A Son of Medaglia D’Oro out of KY Oaks winner Lemons Forever, this colt didn’t even debut until April 9 when 5th in a 7 furlong MSW at Keeneland beaten five lengths. About a month later he stretched out to 9 furlongs at Churchill and was 5th again, this time, beaten five ¾ lengths. In his third start, he finally broke his maiden by a nose going 8.5 furlongs at Belmont. After that, he was thrown into much deeper waters where he finished last of thirteen in the GI Belmont Stakes, 17 lengths behind the winner. Certainly, there is nothing on paper to suggest him stepping up and winning this one, but Dallas Stewart has pulled off much more shocking upsets than this would be.

Listed at 10-1 on the morning line, Ready Dancer comes into the race off of a powerful 3 ½ length Allowance score going 9 furlongs at Belmont on June 25. It was his first win since his maiden score here last summer after struggling to finish near the top in 7 subsequent starts. He is cross-entered in the 6 ½ furlong GII Amsterdam Stakes on Saturday so it will be interesting to see where he ends up. Although if he does end up in this race, it’s likely he won’t be much more than a pace factor.

The morning line favorite at 7/5 is Gift Box breaking out of post position 4 with Javier Castellano aboard. A half-brother to two-time GII winning sprinter Stonetastic, Gift Box is very lightly raced with 2 wins and 2 thirds from 4 total starts. He debuted here last summer finishing third behind stakes winning sprinter Sheikh of Sheikhs beaten five lengths going 6 furlongs. A little more than a month later he stretched out to 8.5 furlongs at Belmont and got the win by a nose over Matt King Coal, who was 18 lengths clear of the third-place finisher. After a strong third behind Mohaymen in the 9 furlong GII Remsen, Gift Box had some time off due to various issues. He returned on May 26 to make short work of an allowance field that included fellow Curlin entrant Ready Dancer. Gift Box is the deserving favorite, and a convincing one as well, he’s the most likely winner, but he is in no way a sure thing.

One of the more intriguing storylines in the race is that of Dolphus, a half-brother to Horse of the Year Rachel Alexandra. The Joe Sharp trainee only has three starts and hasn’t run a race since January 31 when he picked up his second win in a two-turn allowance at Fair Grounds. Before that, he was a weak third behind Pinnacle Peak and Tom’s Ready in another allowance, and a ¾ length debut winner going 6-furlongs, both races were also at Fair Grounds. Dolphus has the pedigree to do great things, whether or not he’ll win Saturday is a big question. Factoring in the layoff, his race times, and the horses he’s been facing it seems unlikely, but he’s still a horse with plenty of upside at 20/1 on the morning line. 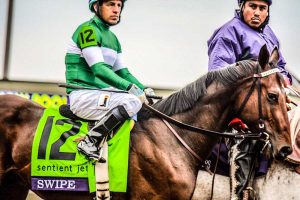 Swipe drew the outside post at 10/1 and will seek to regain the form that saw him second to Nyquist four consecutive races last year. Photo: Jordan Sigmon

The 8/1 third choice for this race is Majesto, most recently thirteenth in the Kentucky Derby, he will try to regain the form that saw him second to Nyquist in the GI Florida Derby. Majesto didn’t debut until October when third to Destin at Belmont, and didn’t break his maiden until February, four starts later. He took that race by a length over next-out winner Dig Deep, who would go on to add a stakes win to his name before unfortunately being put down due to colic. Majesto ran a valiant race behind Nyquist in the Florida Derby, and in fact, many people were using him as their “wise guy” horse for the Kentucky Derby. Another horse with plenty of upside, Majesto figures to be one of biggest threats to the two favorites.

The 7 is Uncle Vinny for Todd Pletcher and Starlight Racing; Irad Ortiz Jr has the mount. Another one that is cross entered into the GII Amsterdam, Uncle Vinny has not crossed the wire first since his debut win on May 21 last year. He is, however, a graded stakes winner via the DQ of Magna Light in the GIII Sanford here las summer. He hasn’t done much to impress since and it’s unlikely he’ll find his way into the winners’ circle via this race.

Swipe drew the outside post at 10/1 and will seek to regain the form that saw him second to Nyquist four consecutive races last year. After missing most of the Triple Crown Prep season because of a bone chip, Swipe made his 2016 debut finishing sixth in the GIII Lexington at Keeneland. He was then discovered to have a breathing issue that required surgery, keeping him away from the races until June 26 when he was a fast-finishing third in an allowance at Belmont. He wheeled back for the GIII Dwyer just thirteen days later, only to finish a very dull seventh. Word from both of the jockeys that rode him in those races at Belmont (Junior Alvarado and Kent Desormeaux) is that the colt didn’t handle the surface there at all. If that is the case and he has taken to the surface at Saratoga, he may very well be the best bet of the day at a generous price.

All in all, the Curlin figures to be a very good betting race, and should provide us with a better look at what is to come in next month’s Travers.

The Curlin Stakes is the 9th race of the day on Friday, July 29, 2016 at Saratoga Race Course. 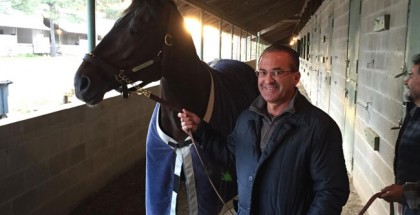