Racing at Ruidoso Downs by Robin Buchanan: At some point every summer, I will find myself drawn to Ruidoso Downs in New Mexico. I leave the Texas heat behind and retreat to the mountains. There is literally something to keep everyone entertained. Ruidoso is a relatively small town, but offers a variety of shopping, hiking, eateries, fishing, casinos, golfing, and of course horse racing. I absolutely love going to visit the track and watch the Quarter Horses run. It holds a special place in my heart as it was where I experienced my first horse race in 1992. I can remember walking up to the rail, feeling the electricity of excitement, and watching the horses run by me. I was mesmerized and enthralled. I was hooked immediately. It was initially hard to comprehend just how powerful the horses were as they ran past me. After they kicked up some dirt in my face, I took that as a greeting, a welcome, and an immediate sense of belonging to the world of horse racing. 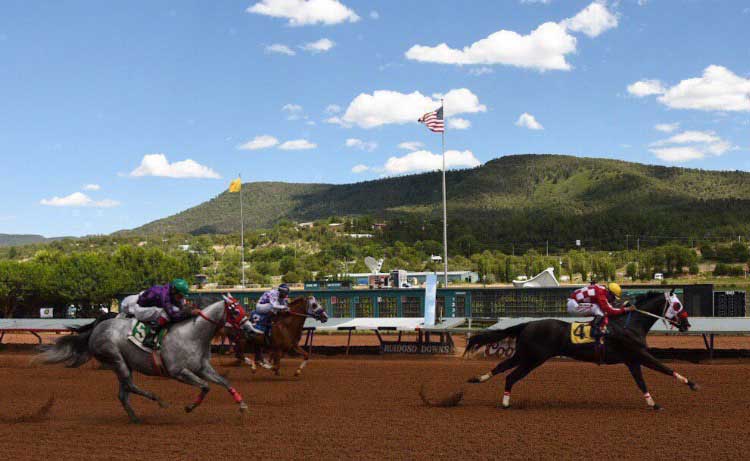 “I absolutely love going to visit the track and watch the Quarter Horses run. It holds a special place in my heart as it was where I experienced my first horse race in 1992.” ~Robin Buchanan

The Rainbow Quarter Horse Derby, featured the 10 fastest 3 year old qualifiers out of 134 runners. The track was packed and you could feel the excitement build as the post time approached. As everyone else hurried to place bets, I grabbed my spot on the rail and leaned over it, hoping to get some pictures. It was post time! The race had a clean start and they ran down the track with tremendous speed. The hands down winner was Valiant Rogue who had the top qualifying time for the race. His final time from post 7 was in :21.545. He beat his qualifying time of :21.705 by :16 of a second. What a deserving winner! This was his third consecutive win and his earnings now soared to $597,806. He will likely be pointed to the All American Derby trials. Not bad for a $20,000 purchase from the Ruidoso Select Yearling sell. It will be fun to see how he does in the upcoming trials. 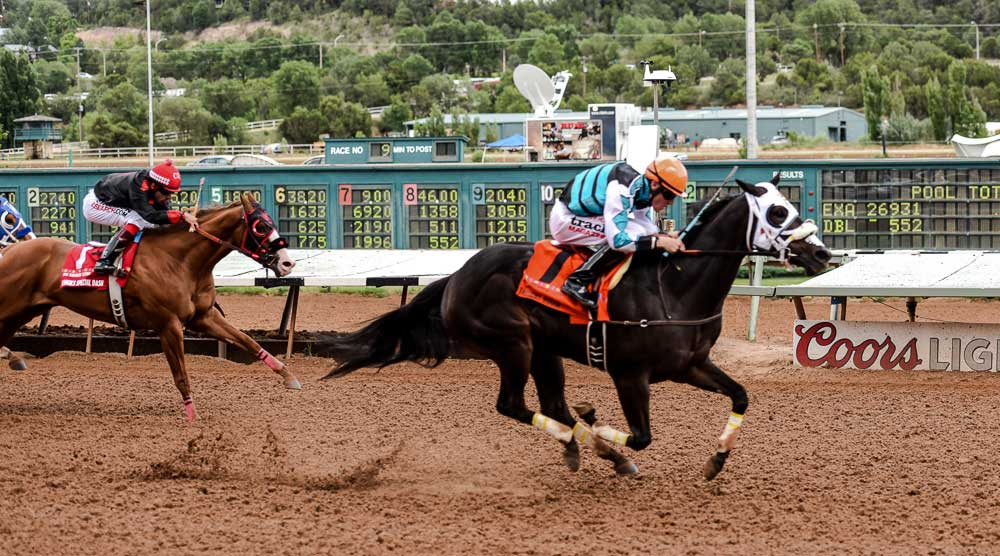 Saturday was full of excitement, but Sunday would not disappoint with the $1,000,000 Rainbow Futurity to look forward to. It was time for the two year olds to battle it out and see who could run the fastest. As they hopped out of the gate, lots of bumping occurred. Getting a clean break for Quarter Horses is half the battle of winning the race I think. Paint My Pilot was in lane one but was all over the track. If it hadn’t have been for the erratic running, he might have won. I really thought he was getting to the finish line first, but A Revenant, breaking from the outside post, wouldn’t allow it. He poured it on in the stretch and overcame Paint My Pilot for a thrilling victory. He started as the post time favorite and won his first stakes victory. It was an exciting race to watch unfold. A Revenant will also be pointed to the American Futurity trials. It was a great weekend of racing and I walked away with some winnings which made it even better! 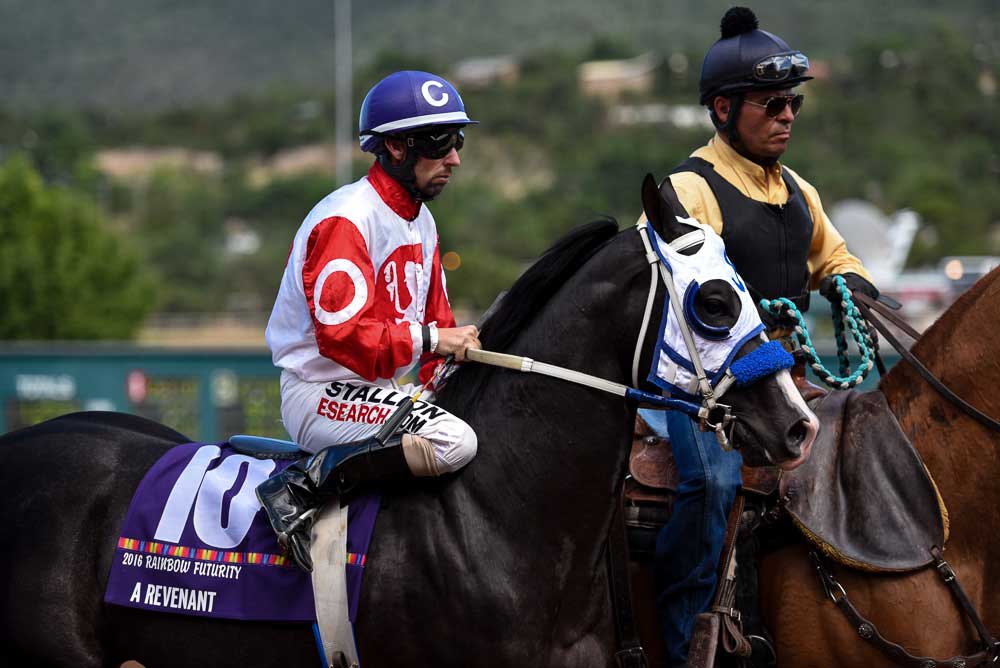 A Revenant, breaking from the outside post, poured it on in the stretch and overcame Paint My Pilot for a thrilling victory in the Rainbow Futurity. Photo: Robin Buchanan

The weekend was over and it was time to bid my annual farewell to Ruidoso Downs. My favorite part of the trip is always the opportunity to see the 2009 Kentucky Derby winner, Mine That Bird. He’s located in Roswell, NM and he is easily accessible. I definitely recommend stopping at The Double Eagle Ranch if you’re in that area. What a treat to see a previous Kentucky Derby winner. I had unwrapped three packages of peppermints and was more than ready to love on him. Dr. Blach is an owner of Mine That Bird and is always a kind generous host. He loves to give memorabilia away of his champion. He handed me winner’s circle pictures and five T-Shirts that unfortunately were too small for my children. Hopefully, some Twitter friend’s children will enjoy them. We headed to the stall and grabbed his halter. We led him out of his stall and he pranced all the way. We accidentally left a gate open and Bird’s companion, which is a miniature pony named Winston, escaped. Bird was fit to be tied. . Bird got a little riled, but calmed down once Winston returned. He was so full of himself still! I loved and doted on him, fed him his bag of peppermints, and snapped a few pictures. Dr. Blach and Mine That Bird makes the trip special. 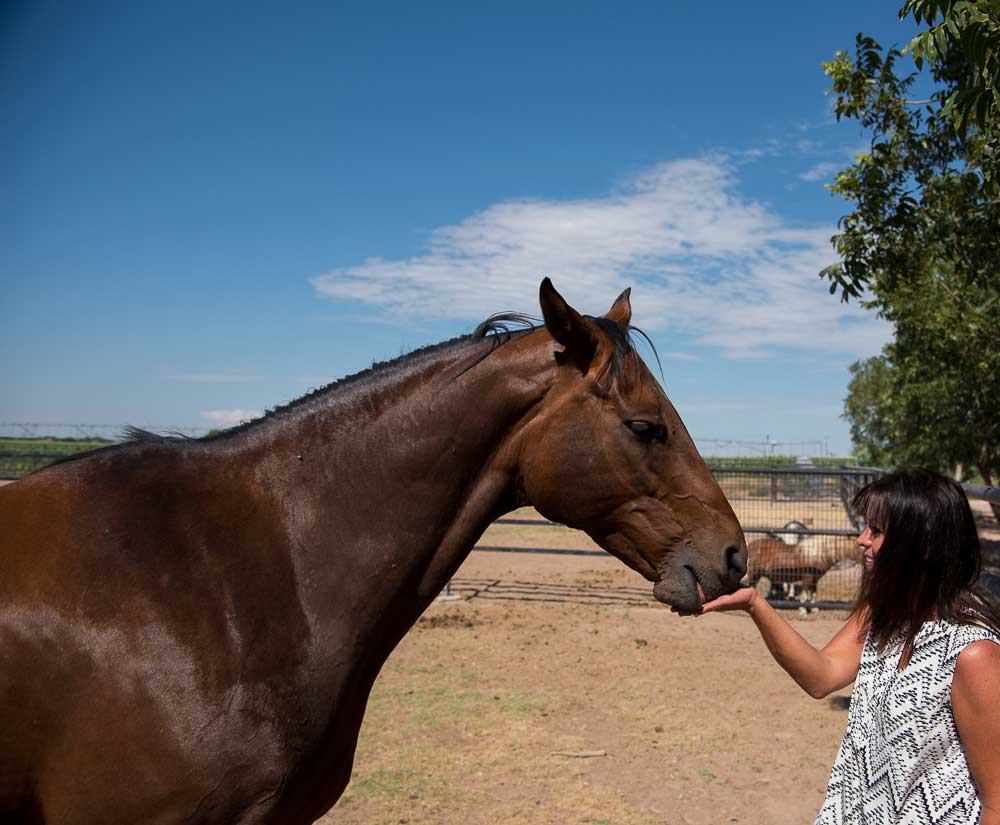 My favorite part of the trip was the opportunity to see the 2009 Kentucky Derby winner, Mine That Bird.
Photo: Robin Buchanan

It is always a memorable time and I look forward to going back every year. How could I not go? After all, this is the track where I fell in love with the ponies. 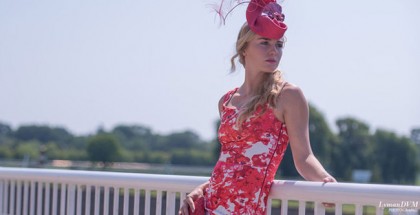 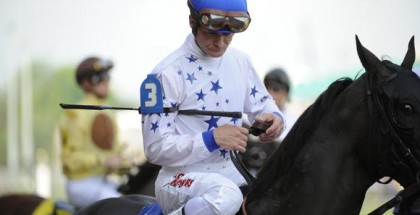