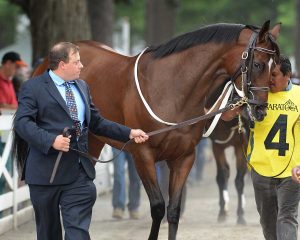 Off the Tracks, a Todd Pletcher-trained daughter of the sneaky-good broodmare Harve de Grace, holds an impressive 6-4-1-1 record and makes her bid for the $500,000 Test Stakes (GI) on Saturday at Saratoga Race Course. Photo: Susie Raisher, Coglianese/NYRA

Off the Tracks, a Todd Pletcher-trained daughter of the sneaky-good broodmare Harve de Grace, holds an impressive 6-4-1-1 record and makes her bid for the $500,000 Test Stakes (GI) on Saturday at Saratoga Race Course. Owned by Newtown Anner Stud and J Stables, she can pick up her second overall Grade I stakes victory if successful going seven furlongs.

It is unusual for The Jockey Club to approve two names so close to each other, but sometimes mistakes happen. To help strengthen her own name, Harve de Grace has produced not only Off the Tracks, but the sire Concord Point who compiled a decent career of his own. Yet, regardless of her sibling, Off the Tracks cost a modest $50,000 at auction in September 2014 (which could simply mean she required more time to develop).

When she made it to the track, Off the Tracks did not disappoint by winning three straight races including the local Schuylerville Stakes (GIII) last July, and an ungraded stakes at Gulfstream Park in late February. At this point, Newtown Anner Stud purchased a majority interest and the new connections transferred her to Pletcher.

With Pletcher, Off The Tracks ran adequately about a month later by placing third in the Gulfstream Oaks (GIII) on a sloppy track, although from reading the press release, a few observers might have been disappointed.

“Everyone was sort of down on her after the Gulfstream Oaks but I thought it was a sneaky-good race,” said Pletcher.

Then came the June 11 Acorn Stakes (GI) at Belmont Park on a weird closer-biased surface. Off the Tracks stalked the leader from about a length or two away and made a strong move to reach second place, while the late-moving Carina Mia started from last and swallowed the field from the outside.

Considering she finished between Carina Mia and Cathryn Sophia, no one can fault the performance too much.

Next, Off the Tracks competed in the Mother Goose Stakes (GI), also at Belmont but now on an unbiased surface, and she picked up her first win of the year with a front-running victory. Despite ripping through fractions of 22 3/5 and 45 2/5 seconds for a 1 1/16th-mile race, Off the Tracks led every step of the way under new jockey Jose Ortiz.

Since the win, she has trained lightly, but Pletcher feels confident heading into the race.

“We didn’t feel like we needed a lot of training – she ran very well from the Acorn to the Mother Goose without having to breeze,” Pletcher explained.

Not surprisingly, Ortiz keeps the mount and it will be interesting to see what strategy is employed from the seventh post position. Three other fillies can potentially take the lead, such as Paola Queen, Kareena and Kinsley Kisses.

Paola Queen drew the rail though, and it is questionable whether she will upset the field even if the others leave her alone. The June 11 fade can be forgiven, but she also turned in a so-so ninth in the Kentucky Oaks (GI).

On the other hand, Kareena holds a lot of momentum after a five-length win to break her maiden and an over six-length win in the ungraded Jersey Girl Stakes at Belmont. The Kiaran McLaughlin-trained entrant is owned by Godolphin Racing, so there are big names behind her. Plus, Javier Castellano rides.

Kinsley Kisses also hails from the Pletcher barn, and she attempts to earn her first graded stakes win after third-place finishes in the Delaware Oaks (GIII), Black Eyed Susan (GIII) and Beaumont Stakes (GIII). With her 5-2-0-3 record, she has hit the board in every start just like Off the Tracks.

Also take a look at Malibu Stacy, Lightstream and Lewis Bay. As for One True Kiss, think about using her for underneath slots in exotics.

Undoubtedly, the Test is a handicapping challenge and bettors cannot go too wrong no matter who they choose. 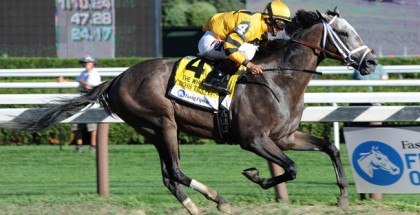 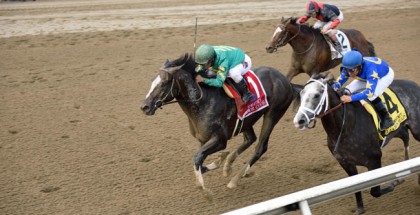 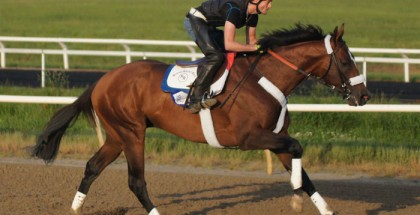