Home » News » Memories Made In Saratoga
No Comments

Memories Made In Saratoga by Robin Buchanan: Well, it is hard to believe, but it has been two weeks since I returned from Saratoga. How time flies. I am really still trying to absorb it all. I didn’t burst into flames as I walked through the gate the for first time, like I thought I would, but I did hear angels singing a melody of my disbelief. I never imagined I would actually see Saratoga with my own eyes. As I walked in I just had to stare. I’ve never seen trees like they have in Saratoga Springs. In Texas, we have some beautiful Oak trees but I am surrounded by mesquite trees and cactus. Not exactly New York. It holds some beauty of its own but it is NOTHING like New York. 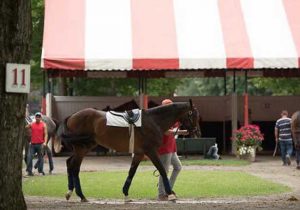 To my left as I entered Saratoga was the paddock. It is graced with beautiful white fences, gorgeous flowers and very large trees. Photo: Robin Buchanan

To my left as I entered was the paddock. It is graced with beautiful white fences, gorgeous flowers and very large trees. The sight of it made me excited and I really couldn’t believe I was finally there. I was going to witness my first Travers and a day full of fantastic races Saturday. It was so hard for me to imagine let alone actually being in Saratoga. I tried to let in sink in. The clubhouse was to my right and already bustling with people. Immediately I knew I was going to love Saratoga. People came in by the droves carrying their coolers, chairs, and all their necessities for the day. The scene really looked more like an all day concert than what you normally see at a track. People placing their folding chairs getting their positions around T.V. monitors for the day. Picnic tables were scattered around the paddock area and a walkthrough that runs from the barns to the paddock. That may be one of the neatest things about Saratoga. I have never been to something like this before at any track. Still amazes me. Many can get a great look at the horses as they walk to the paddock. My good friend and I who I met there, Terry, told me as American Pharoah approached the paddock last year, for the Travers Stakes, you could hear the cheers for him as he walked by the fans. Everyone knew he was coming. That had to be a great experience in itself but I knew I was in for something special that day. 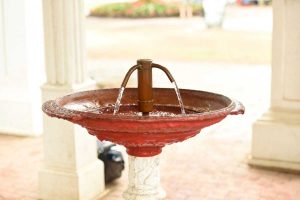 My initiation to Saratoga as is for many was a trip to the Big Red Spring. A rusty old looking red bird bath was before me and I was suppose to drink from it. Photo: Robin Buchanan

We set up our camp Thursday, my first day there. Now I was off to meet some people and do some exploring. My initiation to Saratoga as is for many was a trip to the Big Red Spring. A rusty old looking red bird bath was before me and I was suppose to drink from it. My first thought was gross…. but I was in Saratoga so I decided why not. My friend from California, Kenneth grabbed two cups and said, “me first”. He downed 6 glasses of the water and raved about how good it was. “It’s so good for you too”, he said. It was my turn and by that point I was an eager participant. I grabbed my cup, filled it up, and guzzled that spring water down. If you have ever tasted that spring water you know who the joke was on. Me :-( . My facial expression soured and I really almost vomited. It tasted horrid to me, like I swallowed liquid iron. I am not a fan. No offense to the Big Red Spring though. I’m glad it was there and gave me a funny memory of my initiation to what they say the Spa was all about.

Thursday and Friday seemed like leisure days compared to Saturday. I met a bunch of people, who are now my new friends, played some tickets, and just enjoyed being at the Spa. You have to take the time to just absorb every moment. I may never get back there again so I am really glad I did. Each morning we woke up early and made our way to the track for breakfast. The mornings were damp and cool and it was a treat to see the horses working as we enjoyed talking about the card for the day. There is nothing like drinking coffee and eating a scrumptious meal track side, with great company while hearing and seeing the horses go by. I enjoyed it so much. 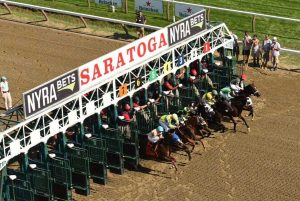 Saratoga is the oldest racecourse in America and holds so much nostalgia. Photo: Robin Buchanan

I had the pleasure of meeting Dean and Patti Reeves. Owners of the 2013 Breeders’ Cup Classic winner Mucho Macho Man and Reeves Thoroughbred Racing. He is one of my all time favorite horses so I was thrilled to finally meet them. They were so down to earth and kind to me. We took our pictures then Patti invited me to their box seat to watch one of their friends horses run. That still blows my mind thinking about it. We had planned on the meeting prior and Patti brought me a souvenir of my cherished MMM. A memory I’ll never forget.

Saratoga is the oldest racecourse in America and holds so much nostalgia. As you’re walking through one end of the track to the other you can hear the music from a swing band, I stopped to listen and watched the swing dancers do their thing as I was in amazement. It took me back to the 1920s. Something I wasn’t expecting to experience at Saratoga. There is so much tradition and history that continues to live on.

After the races those two days I had to experience some of Saratoga Springs. Siro’s is a must and right off the track and is just a short walk across the street. I also made a trip to the Parting Glass because I think you just have to do it, I mean Andy Serling has a show there and they serve some yummy food. Pictures line the walls with some great racehorses. So much history there. They were both fabulous but I’m a music lover so we seeked out some live music and decided on the Horseshoe Inn Bar and Grill. We had to make the trip two nights in a row for the place was so good. We had so much fun and we listened to some great bands and danced the night away. This was my kind of place. This was my favorite spot easily in Saratoga besides the track of course. This is my, “you must go here”, moment out of the trip. 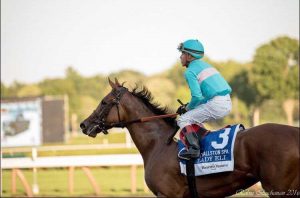 I had the chance to see the great Lady Eli return. What an experience to be in the presence of her. I admire her and Chad Brown so much. Photo: Robin Buchanan

When I got to the track on Saturday I knew it was going to be a crazy day . I had the opportunity to take pictures for Lady and the Track. I really wanted to do a great job and not botch it for them. The day was full of Stakes races and some great horses were to be seen. Not overwhelming at all. I was so excited. Just a kid in a candy store but it was full of horses instead of candy. I readied my camera equipment and tried to prepare myself mentally. I just told myself, “you can do this!” It was fast and furious right out of the gate. Hours of nonstop work but I loved it. It was a dream come true. I had the chance to see the great Lady Eli return. What an experience to be in the presence of her. I admire her and Chad Brown so much. It then was time for Travers Stakes before I knew it. The day flew by. The Travers turned out to be a total blow out by Arrogate. I was not disappointed from what the hype of this race was going to be. I am still in awe I witnessed a 13 ½ length romp and was able to capture that moment in time. After a long day I was done. I think I walked 20 miles and took 4,000 pictures. I was exhausted. I’m struggling to go through the pictures still. Nothing like people seeing pictures from something that happened two weeks before. When they do see them, I hope they can still enjoy them. 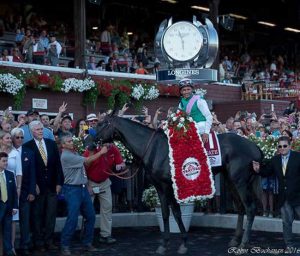 The Travers turned out to be a total blow out by Arrogate. I was not disappointed from what the hype of this race was going to be. Photo: Robin Buchanan

Sunday morning I was worn out, but I dragged myself out of bed early to make a trip to the barn. I had to go see the backside. On arrival there was so much activity going on. I grabbed my camera and started taking pictures of the action. Since I have never been to the barns before at Saratoga I didn’t know what to expect. I found the tranquil Clare Court and watched the horses gallop around the tiny track. It was absolutely beautiful. I could have stayed there for hours. I wish I would have had more time there but I only had the morning. So I started roaming around to see all the horses I heard was going to be there. I walked the shedrow for 4 ½ hours running into horses I admired. I think it was actually better this way for I had no idea who I would stumble upon. I met Twilight Eclipse who is one of my favorite horses. He is still running at 7 years old and always shows his heart and runs his best. I met the assistant trainer for Thomas Albertrani. He was such a sweet guy and helped me around the place. He raved about the “old man” and I enjoyed hearing a few stories of one of my favorite horses. Being around Juba, Mac Daddy Mac, Destin, Creator and so many others, I couldn’t believe that I would be in their presence. I was fortunate to discover the Casse barn. I had no idea he had a barn there. I found out Tepin was there after the fact, and I could have kicked myself. I think I saw her but didn’t know it at the time. I assumed she was already at Woodbine and had no clue she was still in Saratoga. Maybe one of my biggest disappointments. I then spotted Bob Baffert and greeted him with a good morning, and asked if I could see Arrogate. I looked for him but had not spotted him. He said, “sure, he’s right behind you”. I could only laugh. I should have been more observant I guess. It was a fabulous experience that I’ll never forget.

My Saratoga trip was one of the greatest of my life so far. I met some really great people and saw some great horses. I was so fortunate to experience it all. Until we meet again.. My hats off to Saratoga Racecourse. One day, like next year, I hope to come back and see the Travers Canoe painted with Arrogate’s colors. A memory of my beloved experience and one I will never forget.

My hats off to Saratoga Racecourse. One day, like next year, I hope to come back and see the Travers Canoe painted with Arrogate’s colors. A memory of my beloved experience and one I will never forget. Photo: Robin Buchanan 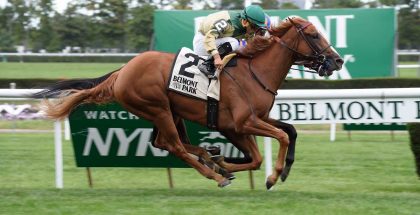 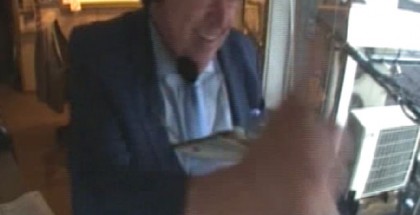 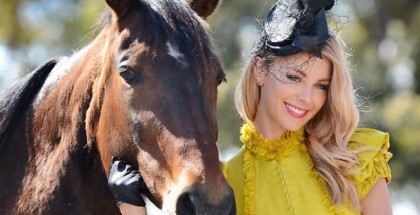 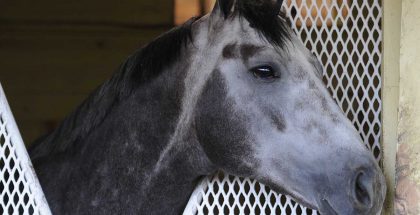