California Chrome to be Awesome Again in Awesome Again Stakes: Superstar California Chrome, who at age five is North America’s all-time leading money earner, is scheduled to run in the Grade I, $300,000 Awesome Again Stakes on Saturday, Oct. 1 at Santa Anita, according to his trainer, Art Sherman. Fresh off victory in the Grade I Pacific Classic Aug. 20, the California-bred son of Lucky Pulpit has record earnings of $13,252,650 and is line for a $1 million bonus if he wins both the mile and one eighth Awesome Again and the mile and a quarter $6 million Breeders’ Cup Classic at Santa Anita on Nov. 5. 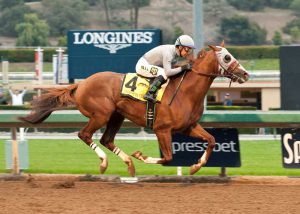 Superstar California Chrome, who at age five is North America’s all-time leading money earner, is scheduled to run in the Grade I, $300,000 Awesome Again Stakes on Saturday, Oct. 1 at Santa Anita, according to his trainer, Art Sherman.
Photo: Benoit

“He’s come out of the Pacific Classic in great shape,” said Sherman from his Los Alamitos base. “We’ll bring him up to Santa Anita about a week before the race and let him get re-acclimated there. We did that earlier this year and it worked out real well. The million dollar bonus is very nice, but if he wasn’t ready, we wouldn’t be running. The Breeders’ Cup Classic is our major objective, no question, but he’s doing great and we expect him to run big in the Awesome Again.”

Ridden in his last 17 starts by Victor Espinoza, California Chrome has won four out of seven starts at The Great Race Place—all of them stakes.

“We are elated at the prospect of California Chrome running on our Breeders’ Cup Preview Day here at Santa Anita on Oct. 1,” said Joe Morris, Senior Vice President, West Coast Operations for The Stronach Group. “At this point, he has truly become a superstar in our game and we want to thank his owners, Perry Martin and Taylor Made Farm, as well as Art Sherman, for making the commitment to run here on Oct 1. This is going to be huge for our fans and for our sport.”

A winner of the 2014 Santa Anita Derby, Kentucky Derby and Preakness Stakes, “Chrome” is now riding a five-game winning streak, which began with victory in Santa Anita’s Grade II San Pasqual Stakes on Jan. 9. A subsequent winner of two stakes in Dubai, including the Dubai World Cup on March 26, California Chrome was then freshened at Taylor Made Farm in Kentucky prior to winning the Grade II San Diego Handicap on July 23.

The Awesome Again is one of five Breeders’ Cup “Win and You’re In” qualifying prep stakes on Oct. 1. Santa Anita will be hosting the two-day Breeders’ Cup for a record ninth time on Nov. 4 & 5. For more information on Santa Anita’s upcoming Autumn Meet, which opens on Sept. 30, please visit santaanita.com. Reserved seating for the Breeders’ Cup can be purchased by calling the Breeders’ Cup Ticket Office at (877) 849-4287 or online at bctickets@breederscup.com.