Not This Time Earns First Kentucky Derby 2017 Points: Albaugh Family Stable’s homebred Not This Time, a half-brother to last year’s Breeders’ Cup Dirt Mile winner Liam’s Map, is the early points leader on the 2017 “Road to the Kentucky Derby” following a jaw-dropping 8 ¾-length demolition job under jockey Robby Albarado in the 35th running of the $150,000 Iroquois Presented by TwinSpires.com (Grade III) for 2-year-olds at 1 1/16 miles on Saturday at Churchill Downs. 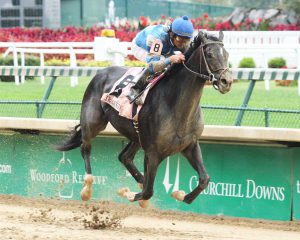 The Iroquois also is part of the Breeders’ Cup “Win and You’re In Juvenile Division” Challenge and the win by Not This Time earned the Kentucky-bred son of Giant’s Causeway a guaranteed spot in the starting gate for the $2 million Sentient Jet Breeders’ Cup Juvenile at Santa Anita on Nov. 5.
Photo: Coady Photography

Not This Time was compromised at the start when he hopped in the air but recovered nicely while rating in mid-pack from the outside down the backstretch. With his long, reaching stride Not This Time swung four-wide on the turn for home, caught the leaders at the head of the stretch and drew away under a hand ride with overwhelming authority to the finish and paid $5.60, $4 and $2.80 as the 8-5 favorite in the field of eight juveniles.

Owned by Dennis Albaugh of Iowa and trained by Dale Romans, Not This Time won for the second time in three races and the $90,210 first prize lifted his earnings to $114,183. Not This Time launched his career in June at Churchill Downs with a fifth-place finish as the favorite in a six-furlong maiden race, but returned to romp by 10 lengths on Aug. 12 at Ellis Park when stretching out to one mile.

“He’s the real deal,” Romans said. “He’s spooky good and I think he’s everything I’ve always thought he was. He’s just so talented. That (slow break) wasn’t going to get him beat.”

Blame Will led the field through early fractions of :24.30 and :49.57 with Thirstforlife in closest pursuit. On the far turn, Thirstforlife took advantage after six furlongs in 1:11.45 with 3-1 second choice Recruiting Ready, with Gary Stevens up, in close range, but Not This Time was commencing his winning move. The winner opened an unassailable lead at the head of the stretch and never was threatened the rest of the way. Lookin At Lee, ridden by Ricardo Santana Jr., rallied to ‘win’ the separate race for second by a head over Recruiting Ready, who was a length clear of Honor Thy Father in fourth.

Completing the order of finish were Thirstforlife, Just Move On, Blame Will and Skinflint.

Iroquois Stakes 2016: The Start of a Long Journey

Not This Time is the Real Deal 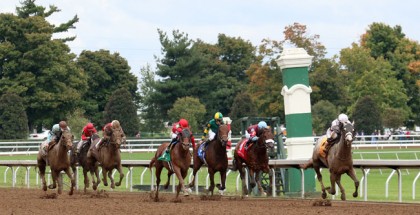 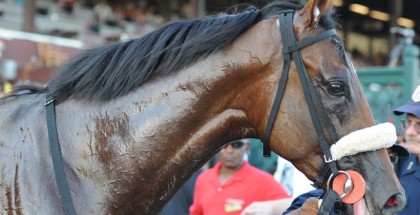 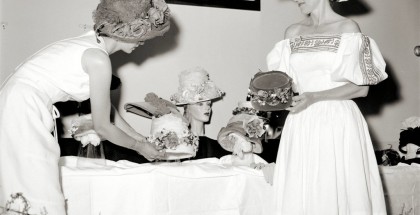