California Chrome Nears End in Awesome Again Stakes by Reinier Macatangay: Careers do not last forever, and neither does California Chrome’s storied racing career. The expected favorite for the $300,000 Awesome Again Stakes (GI) on Saturday at Santa Anita Park will probably make his second-to-last start on this racetrack, before tackling the Breeders’ Cup Classic (GI) and Pegasus World Cup. 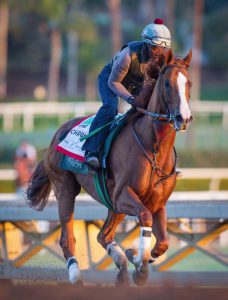 The Art Sherman-trained son of Lucky Pulpit heads into the Awesome Again in career best form after destroying his Pacific Classic (GI) foes, including Dortmund, in breathtaking fashion.

Still, horse races are almost never certain to play out how bettors think. So, maybe there is a hole in his win at Del Mar, however unthinkable the logic may sound after watching him coast home by five lengths.

While the 2014 Horse of the Year overcame the rail a month ago, he drew the same position again.

California Chrome has always experienced trouble with racing on the rail for his entire career, even before blowing up in popularity with his Triple Crown bid. The problems started in the 2013 Golden State Juvenile Stakes and appeared in other races such as the 2014 Belmont Stakes (GI) and Pennsylvania Derby (GII).

Most horses do not react well to taking dirt, but California Chrome seems especially compromised when it happens. In contrast, when California Chrome runs outside horses, he fires, no matter if he loses or not.

For example, he ran outside horses in the Kentucky Derby (GI) and Preakness Stakes (GI), and won impressively both times. The same year, he had a wide trip in the Breeders’ Cup Classic, and ran a solid third.

If California Chrome is stuck inside, then he must be clear of other horses in front. The 2014 San Felipe Stakes (GII) proved California Chrome can duel on the rail, against the sprinter Midnight Hawk, and win.

In the recent Pacific Classic, despite the rail position, he was helped by a few factors. For one, his opponents to the outside were closers. Because those horses did not possess the same early speed, California Chrome cleared them easily, before the “shock and awe” tactics Victor Espinoza encouraged when shifting out wide.

Beholder and Dortmund, who both possess a good amount of speed, were intimidated by California Chrome aggressively coming out to the six-path, and the two of them let him coast along uncontested after the first turn.

Fans might read the 23.20 and 47.29 fractions, and think California Chrome set a fast pace while alone on the lead in the 1 1/4-mile race, but for Del Mar, those were moderate splits, at least for the specific card.

With the clean break, the ability to clear the neighboring horses, the initial “shock and awe” of coming out and the slow fractions, California Chrome did what any top-class horse should in the situation – romp home by five.

This time, Dortmund is drawn directly outside California Chrome in the No. 2 slot.

If Rafael Bejarano wants to win aboard Dortmund, he will use Dortmund from the break and make sure to remain on California Chrome’s flank for the entire trip. Dortmund should never be more than a length behind.

In all likelihood, California Chrome will handle the pressure, but no one should assume any horse is a lock. On his best day, Dortmund can run with any horse, as proven in the San Diego Handicap (GII) back in July when losing to Chrome by a half length.

Hoppertunity, Win the Space, Soi Phet, El Huerfano and Hard Aces complete the field, although none of them have a chance except in the most extreme speed duel scenario.

No matter the outcome, California Chrome has had a full career. He won over fans’ hearts after his early 2014 win streak, and then lost some when former owner Steve Coburn went on an epic rant in the failed Triple Crown bid.

One year later, doubters laughed when he traveled to the Middle East for the 2015 Dubai World Cup (GI), and he showed he belonged with a runner-up finish. Fans were not done with their outrage though, and continued to complain when California Chrome was sent to Europe for the Prince of Wales’s (GI). The trip did not work out.

After time on the shelf, the five-year-old horse put his talent together this year and silenced doubters with convincing wins in the San Pasqual Stakes (GII), 2,000 metres handicap (Dubai prep race), Dubai World Cup, San Diego Handicap and Pacific Classic, and at this point, no one believes he is not capable of defeating any horse.

California Chrome needs one more Grade I to possibly lock up a second Horse of the Year title, and it should come in this spot or in five weeks. Good luck to him and his connections.