Home » News » Desormeaux Can Sweep the Exacta in FrontRunner, Chandelier
No Comments

Desormeaux Can Sweep the Exacta in FrontRunner, Chandelier by Jordan Sigmon: Keith Desormeaux has already had a huge year in 2016, and it could very well get even bigger with the help of four very promising two-year-olds on Saturday at Santa Anita. In the FrontRunner, Desormeaux has Del Mar Futurity runner-up Straight Fire as well as the maiden Vibe, and in the Chandelier he has the undefeated turf filly With Honors and maiden winner Princess Coco. 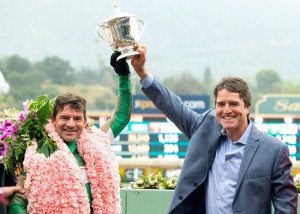 Straight Fire was the heavy favorite in the Del Mar Futurity, and he looked very good for most of the race before succumbing to several factors while Klimt pulled clear to a commanding victory. The biggest contributor to his loss was likely his opening half in 44 ⅖, and this after already having run two very fast races in the seven weeks before it. Something else to consider has to do with the track at Del Mar all summer being tricky to inside speed. On Saturday many of these factors are likely to be swayed in his favor. He’s a naturally fast horse, but he’s not a sprinter, and with this being most of these horses’ first times around two turns, it’s difficult to find another horse in the field that will pressure him into the fractions he had to run at Del Mar. Also, speed on a fast track at Santa Anita almost always fares very well. But the most drawing factor is his training resume in the three weeks since the race. The first two weekends after, Straight Fire did two-minute-licks instead of working, likely to aid in stamina build up and also to keep him more relaxed. In his only work for the race last weekend, Straight Fire went 5 furlongs in a very slow 1:03 ⅖, but it was the way he did it, and the time of his final furlong that sticks out. He went very well in hand for the first half mile, and Desormeaux caught him coming home the last 1/8th in :11 flat earning the rare Southern California “breezing” rating. Now, he won’t be able to run that slow early on Saturday, but if they let him get into his rhythm going :46 ⅗ or slower, he’s not going to be coming back to the field. Finally, the switch to Flavien Prat should be a huge positive, do note though that this change was an owner decision, not a trainer decision.

A wild card in the race for Desormeaux is the Astrology colt Vibe. Vibe opened his career finishing 6th beaten 13 lengths by fellow FrontRunner entrant Midnight Pleasure going 6 furlongs at Del Mar. It’s likely that was just a simple learning experience for him as Desormeaux is not one to crank them up first time out. In his next start, Vibe gained valuable two turn experience going a mile for the first time. Running almost the entire race 4-5 wide, the task proved a bit too much for the colt, while Plum Dandy who is also in this spot got a dream trip and the win. If he can take another step forward, and get an easier trip, Vibe could easily pick up the pieces for place honors at what is sure to be an appetizing price.

Switching gears to the fillies, With Honors will be trying the dirt for the first time, but from the way she’s trained over it, there shouldn’t be a problem. Being by War Front, it makes sense that she began her career on the turf, but coming from a Mr. Prospector line mare who is out of a mare that was a GI winner on dirt, and a MG3 winner on turf, the variance in surface doesn’t look to make much difference. Also of note, With Honors is bred on a very similar cross to one of War Front’s most successful dirt runners in Departing. She’s another naturally fast horse, but she’s also displayed a great level of intelligence in the professionalism she has shown in both races. In her debut, With Honors was stuck with the rail draw but she popped right out of the gate and ran a 22 ⅘ opening quarter; she then slowed it right down to run the middle two-quarters in 50 ⅕, and quickened right back up to run the final quarter in 24 ⅖. In her stakes debut in the Del Mar Juvenile Fillies Turf, With Honors got stuck in the 13 hole, all the way on the outside. This proved no issue as she popped right out of the gates again and dropped down towards the inside in an opening quarter of 23 ⅘. The middle two-quarters slowed right down to 50 ⅖, but it was her final quarter time of 23 ⅖, running the final ⅛ in under 12 seconds that showed just how brilliant she is. Her ability to establish position early, but then ration out her speed, and come home in very strong fractions shows a great deal of maturity, and a boatload of talent. Though run on different surfaces, not a single horse in this field, front runner or closer, has demonstrated this kind of late speed.

A longer shot in the Chandelier for Desormeaux is the Pioneerof the Nile filly Princess Coco. The striking dark bay filly boasts valuable two turn experience coming into the race, in fact, it was the increase in distance that led to her breaking her maiden. The time of the race was very slow, and the beyer was very low, but it’s the manner in which she won that is so intriguing. After bobbling a bit at the start, Princess Coco sat off the pace before splitting rivals and drawing clear to a 2 ¼ length triumph. While a win is unlikely, this is a filly you have to include on your ticket, she been getting better with each start, and will only continue to get better with time and distance.

There are plenty of good horses in both races Saturday, but with the likely setups and the talent all four of these young horses have shown it’s easily possible that Keith Desormeaux will be having a very good day on Saturday.