Theory a Logical Choice in Futurity Stakes by Reinier Macatangay: Few bettors will argue with Theory as a single in the $200,000 Futurity Stakes (GIII) at Belmont Park on Saturday. The promising 2-year-old son of Gemologist looks well bred, comes from the Todd Pletcher barn and owns the highest BRIS Speed Rating in the six-furlong race. Defeating him would come as a minor surprise. 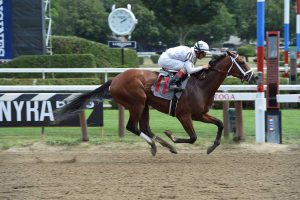 Few bettors will argue with Theory as a single in the $200,000 Futurity Stakes (GIII) at Belmont Park on Saturday. Photo: Coglianese/NYRA

Owned by China Horse Club and WinStar Farm, Theory cost quite a bit at auction too as a $335,000 purchase this year. Usually, expensive horses are meant to win early and gain a quick return on investment for the connections.

He did not disappoint anyone, at least not in his July 30 career debut which came in a Saratoga maiden event.

Theory chased a 4-1 shot named Tale of Silence for the initial stages of his first race through somewhat moderate fractions of 22.38 and 45.59. Fellow Futurity competitor Reckling chased back in third, while The Walk ran in fifth.

Around the turn, Theory took control of the lead over the tiring leader. Reckling, a son of Dialed In trained by Steve Asmussen, closed the margin to within two lengths. Tale of Silence faded, and The Walk remained in midpack. Theory began to draw clear though by over five lengths, and won, while Reckling settled for the runner-up position.

According to the chart, Theory broke his maiden in a “brisk hand ride.” Furthermore, Reckling and The Walk (who also competes in the Futurity) each returned to break their maidens. This race is contested at the same distance as Theory’s maiden win, which gives him the advantage even more. How can Reckling and The Walk beat Theory?

In addition, a recent press release indicates Pletcher sounds confident about his entry.

“As soon as I watched him work, I entered him,” he said.

Unfortunately, the Futurity only has five horses overall, leaving two runners left to discuss. Both remaining horses hold a small chance, although it is unwise to be too excited about them.

On the rail, Moves Like Ali makes his second career start after a successful debut at Saratoga where he held on by a length. Horses from Saratoga always deserve extra consideration because of the tougher competition.

Moves Like Ali also possesses a nice pedigree as a son of the precocious Maclean’s Music, and went for a fairly expensive price of $175,000. Clearly, they bought this one to win early, and like Theory, he delivered fast.

The Futurity will be more difficult, and Moves Like Ali drew the rail. Sometimes a rail draw means the jockey will ask his horse more aggressively from the start to establish position. If so, Theory will press him.

Star Empire, from post five, also seems probable to contest the pace for trainer Wesley Ward. He displayed speed in his local career debut back in May, when he pressed the leader in a five-furlong event before drawing clear by over six lengths. The runner-up and third-place finisher returned to break their maidens next time out.

From there, Star Empire won another race at Presque Isle Downs, before turning in a subpar effort in the Arlington-Washington Futurity (GIII) at Arlington Park where he lost by seven lengths. The notes indicate some bumping occurred. Those races came on synthetic, and perhaps a return to dirt will help this one improve.

Otherwise, to no one’s surprise, Theory should win. Pletcher is expected to take most of the 2-year-old races. The four other horses must find a way to take down the favorite, but as it appears on paper, relying on Theory to win again makes logical sense. Expect a predictable conclusion.