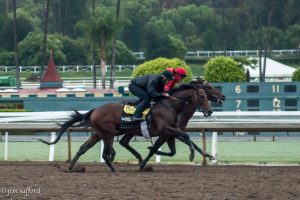 Nyquist (outside) works in company with stablemate Ralis at Santa Anita Park on October 17, 2016.

Champion and Kentucky Derby (GI) winner Nyquist on Monday continued to progress to an inevitable start in the November 5 Breeders’ Cup Classic (GI) at Santa Anita in three weeks by logging six furlongs in 1:13 in company with grade 1-winning stablemate Ralis over the California oval’s main track. The move, which was under regular exercise rider Jonny Garcia, was the son of Uncle Mo’s second breeze since a disappointing sixth-place finish in the Pennsylvania Derby (GII) a month ago and was the second-fastest of five at the distance for the day.

While O’Neill is happy with how his charge is training, he doesn’t underestimate the task Nyquist will have to face when he squares up with California Chrome, who is unbeaten in five starts this season and ranks as North America’s richest racehorse of all time. The conditioner does acknowledge, however, that Nyquist has an affinity for the Santa Anita surface and also that sophomores have a history of performing well in the Classic.

“Nobody in their right mind is looking forward to facing an older horse like California Chrome,” O’Neill said. “(But) he loves the Santa Anita main track.”

Final preparations for Nyquist for the Classic call for one final work, which will likely come between October 26 and 28. Keeping Nyquist happy and healthy is priority number one for O’Neill and the multiple classic-winning trainer expressed his pleasure with the colt’s weight and overall appearance, and that Monday’s work was all just a matter of maintenance moving forward.

“I’m happy with where Nyquist is at,” O’Neill said.