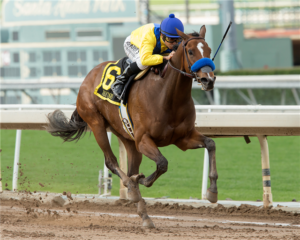 Chalk players had an anxious moment prior to the start of Saturday’s Grade II, $200,000 Santa Maria Stakes, as 1-5 favorite Vale Dori reared, ejecting jockey Mike Smith out the back of the starting gate in the process, but their fears were soon allayed, as the brilliant Argentine-bred mare made short work of five rivals, winning by 1 ¾ lengths while negotiating 1 1/16 miles over a wet fast Santa Anita main track in 1:43.19.

Breaking from the far outside, the Bob Baffert-conditioned Vale Dori was away alertly and sat a close second to pacesetter Midnight Toast to the far turn where she took command with three furlongs to go and with a staggering $558,490 bet to show on her (out of a total show pool of $608,355), the Santa Maria was hers.

“She got a little excited in the gate today,” said Smith. “I’m not really sure what happened in the gate, something spooked her. She just reacted to it and almost went all the way over…She was aggravated for a good eighth of a mile before I talked her out of it. After that, she was well within herself.

“She’s gotten good. There’s not a Songbird or Stellar Wind in there, so that certainly helps. But she’s climbing the ladder. As some point she’s going to deserve a chance at them. If anyone had hooked up with her today, she would have sat off of them no doubt, just no speed today.

“She was a little fresh today,” said Baffert. “I missed some time with her during the rains, so she was coming in here a little bit fresh today. I missed a lot of days (training) when it was raining, so we just took it easy with her. These races (most recently the Grade II La Canada on Jan. 14) have been keeping her fit so I don’t have to do too much in between…We’re definitely looking at the Santa Margarita (Grade I, 1 1/8 miles on March 18).”

Show Stealer, who was taken back to last early by Tyler Baze, ran a big race from off the pace and finished second, 3 ¾ lengths clear of Autumn Flower. Off at 6-1, Show Stealer, who is trained by Art Sherman, paid $3.40 and $2.40.