How Garrett Gomez Transformed My Life 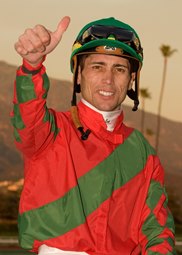 As the momentum of Kentucky Derby fever builds like a huge tidal wave, racing fans have the potential to encounter new superstars.  Stunning, three-year-old equine athletes coming on to the national scene vie for top honors and their once-in-a-lifetime opportunity to take home the roses.

The most exciting two minutes in sports will demand skill, grit and a strong heart of its young thoroughbreds.  Superstar-like guidance from trainers and riders will give them the best chance for winning the top prize.  It might not take a village, but it absolutely requires a vigilant partnership to win — and the rewards include a permanent stamp in the history of America’s greatest race.

The late Garrett Gomez, a dual Eclipse Award-winning rider never won the Kentucky Derby or a Triple Crown race.  He finished second in the 2009 Derby aboard Pioneerof the Nile (who would sire 2015 Triple Crown winner American Pharoah) and… (more)

The Best Still in West as Unique Bella Wins Again