Home » Horses We Love » In the Breeding Game, Sometimes Love Is More Important Than Money

In the Breeding Game, Sometimes Love Is More Important Than Money 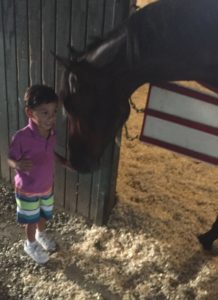 Sam Britt and Mike House’s grade 1 winner Gabriel Charles was retired late last year after re-injuring a tendon that previously kept him sidelined for more than a year and is now standing his first season at stud at Dave and Sommer Smith’s Nexstar Ranch near Temecula, CA, for a fee of $1,400, live foal. The now 7-year-old son of Street Hero and the Atticus mare Star of Atticus was trained by Jeff Mullins throughout his career and finished up with a four wins, five seconds and a third in 12 starts and $604,400 in earnings, which included money from two graded stakes wins and placings in several others.

While it’s become the norm for most graded stakes winners who are retired and sent to stud duty to be syndicated and turned over to agents and managers and farms, Gabriel Charles may be representing… (more)

From Hot Dogs to Hip Numbers: One Woman’s Journey Into Racehorse Ownership