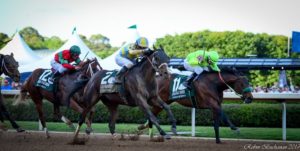 John Oxley’s champion Classic Empire’s Road to the Roses hasn’t been as smooth as his connections planned when they accepted his Eclipse Award as 2016’s top 2-year-old in early January. The bay colt’s sophomore season has been plagued with an uncharacteristic poor performance, a foot abscesses, a sore back and, on at least two occasions, his flat-out refusal to train, all of which had trainer Mark Casse and jockey Julien Leparoux scratching their heads. And with just three weeks left to the Kentucky Derby (GI) the only thing they all knew for certain was that in order for Classic Empire to make the gate under the Twin Spires he might need what could only be described as an act of God.

So, after a winter full of the unexpected and twist and turns that tried everyone’s patience, Classic Empire finally… (m0re)

For updated Future Book odds on the likely runners for the Kentucky Derby, go to: