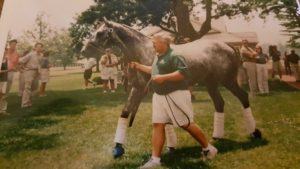 “Racing is a funny, interesting sport,” Lanter observes. “It has to be the only sport where you can go to the farms, or the Kentucky Horse Park, or the track and see the athletes and spend time with the athletes, both before and after their careers. I mean, you can’t go to Michael Jordan’s house and feed him a peppermint. Horse racing fans are unique. When they catch on to one and it sticks, they are fans forever and they will go anywhere to see them.”

It’s been 20 years since Robert and Beverly Lewis’ Silver Charm ran into the horse racing record books and the hearts of countless racing fans with his head victory in the 1997 Kentucky Derby at Churchill Downs. The Florida-bred son of Silver Buck carried Hall of Fame jockey Gary Stevens that day, providing the veteran reinsman with his third Derby win to go along with his victories aboard Winning Colors (1988) and Thunder Gulch (1994).

The 123rd Kentucky Derby also represented the initial victory for the Lewises, as well as Hall of Fame trainer Bob Baffert, who has since tightened the girth on three more winners of The Greatest Two Minutes in Sports — Point Given (1998), War Emblem (2002) and American Pharoah (2015), the latter of which went on to become the first Triple Crown winner in 37 years.

After an impressive career that saw him collect victories in states from coast to coast, as well as the Middle Eastern desert, Silver Charm was retired in early June of 1999 and sent to Three Chimneys Farm near Midway, Kentucky, for stallion duty. He resided at Three Chimneys until… (more)

Two Down, One To Go For Justify