My First Derby or How to Have Fun In the Mud

If you’re like me, you’ve always wanted to see the Kentucky Derby in person. It’s a “bucket list” item for lots of us. This year, when a friend bought tickets and offered one to me as a gift, I finally got my chance. 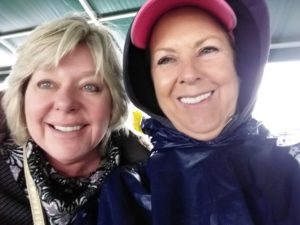 Writer Mary Perdue and friend Marilyn Soelter waiting in the rain for the start of Race Two on Derby Day from our seats in the Starting Gate Lounge, 5/6/17. Photo: Mary Perdue

Packing my suitcase a few days prior, I ditched the fascinator and dress I’d planned to bring and opted for leggings, a hooded coat, and a ball cap and mittens instead. With highs in the low 50s and rain forecasted for the whole day, I gave up glamour for at least a chance of comfort.

My friends are experienced Derby-goers, attending every year, so they know the ropes. Before we even left the house they gave me a rain poncho, which turned out to be one of the best things anyone’s ever given me. Ever!

We left early, not because my friends wanted to make the first race, but in order to not have to park in Bullitt or Spencer counties. I learned if you want to park within a mile of the track, you better get there by 10:00 a.m.!

The grounds and track were soaked from rains that had already lasted several days, but even at 10 a.m. there were die-hards in the infield staking out spots along the rail for Derby post time almost nine hours later: 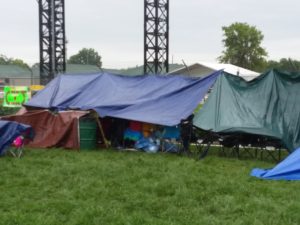 Other intrepid infield trackgoers included these ladies who didn’t surrender their Derby finery: 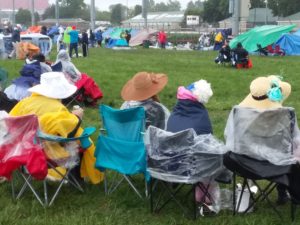 Ladies keep their Derby hats on despite the inclement weather at Churchill Downs on Derby Day, 5/6/17. Photo: Mary Perdue

And these fans who stayed well hidden under cover waiting for the first race: 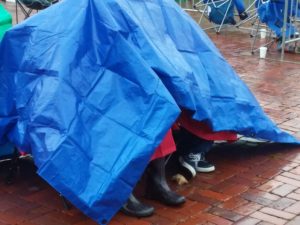 Feet poke out from under a tarp on a rainy Derby Day at Churchill Downs, 5/6/17. Photo: Mary Perdue

As racing started and the crowd increased, I began to realize that attending the Derby is as much about people as it is about horses: 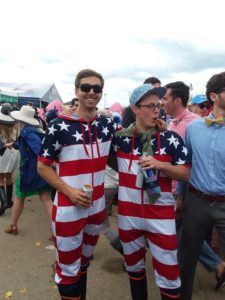 I’ve never been a big gambler, but I worked up my courage and placed dinky show bets only on horses I knew or had an attachment to. I went to the same betting window because the retired Army teller there seemed to be bringing me good luck.

My first bet was Horse Fly, who didn’t hit the board. When I saw him the next day on the backstretch at Wayne Lukas’ barn, he didn’t seem worried that he’d let me down: 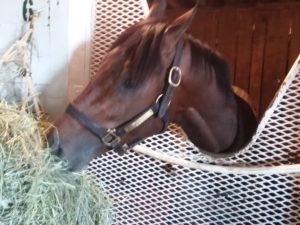 Horses who scored for me on the rest of the card included Mo Tom, Linda, No Dozing, Arklow, and my best play of the day, Tom’s Ready who hit the board at 13-1 in the Churchill Downs Handicap. One who let me down was Cherry Wine, though. The handsome gray was second in last year’s Preakness and unfortunately finished out of the money in allowance company on Derby Day. I still love him, though.

Watching these horses made me realize what a fine line there is between glory and being an also-ran. Some of them, like Cherry Wine, were former classic contenders racing against easier company, while others were 3-year-olds who earlier in the year had a shot at making the Derby field but failed to qualify. It’s a tough sport.

When the sun finally came out about halfway into the card, a huge roar swelled from the crowd as if a longshot had won a photo finish. Everybody was happy. I used the break in the weather to venture back into the infield, which was now shoulder to shoulder: 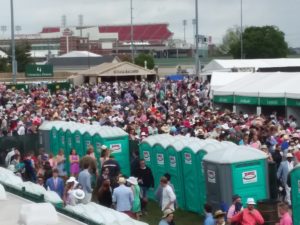 The mood of the infield crowd was boisterous and happy, and most seemed to be feeling no pain from the muddy conditions: 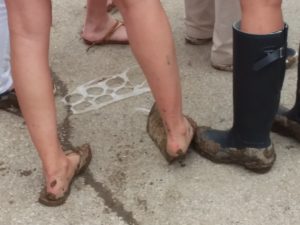 When it came time for the Derby post parade, I felt my heart skip when the colts came down the track to My Old Kentucky Home. Nothing can prepare you for the sight of 150,000 people all focused on the same 20 horses at the same time. 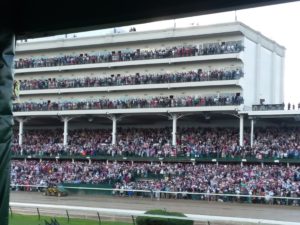 You realize in an instant that these colts and their connections have all been pointed toward greatness which will only be earned by one, and yet in that single moment – parading on the track – they all still have the promise of it, and the sight of those beautiful animals, products of centuries of careful breeding, along with an appreciation for the love, energy, hope and money that has been poured into them just to get them to this place and time, overwhelms you.

Whether it’s Thunder Snow, out of his element and bucking from the gate until he’s pulled up, or Always Dreaming coming into perfect form at just the right time, I was happy for everyone watching the 143rd running of the Kentucky Derby. 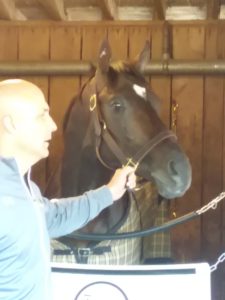