Home » Horses We Love » Ten To Take On Test Stakes

Ten To Take On Test Stakes 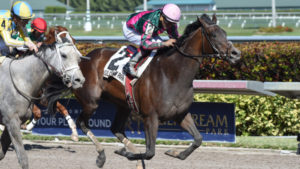 Ten 3-year-old fillies will tackle the seven-furlong distance of the $500,000 Test Stakes (GI) at Saratoga, the traditional prep for the Alabama Stakes (GI) later in the summer meet at the upstate New York track. This year, seven local fillies will line up and face the starter and will be joined by three California shippers, including Baoma Corp.’s Faypien in an attempt to give her Hall of Fame trainer Bob Baffert a third win in the historic event.

Speaking of history, since the Test was first contested in 1922, dozens of fast fillies have collected a victory for their proud connections, especially from the 1960s until now, with names like Moccasin, Gamely, Ta Wee, Numbered Account, Desert Vixen, My Juliet, Lady’s Secret, Safely Kept, Go For Wand, Versailles Treaty and… (more)