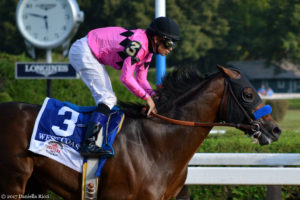 Gary and Mary West’s West Coast took the East by storm on Saturday, posting an impressive victory by 3 ¼ lengths in the $1.25 million NYRA Bets Travers Stakes (GI) at Saratoga. The bay son of Flatter was ridden to victory by trainer Bob Baffert’s go-to jockey Mike Smith, who was only aboard the bay son of Flatter once for a win in the Easy Goer Stakes at Belmont, and marked the second Travers win in a row for the Hall of Fame duo (they teamed up last year with champion Arrogate). Baffert also saddled Point Given to victory in 2001 and Smith previously guided Holy Bull to victory in 1994 and Coronado’s Quest in 1998.

From the break, West Coast let at every call through, posting reasonable splits of :23.82, :48.12 and 1:12.23 with Derby winner Always Dreaming and Preakness winner Cloud Computing pressuring to each side. As he rounded the far bend, his early pursuers were out of gas, but Gunnevera was in full flight from nearer the back of the pack early and Irap was gearing up from his position just behind the early pace.

At the top of the stretch, West Coast was… (more)

Will a Huge Longshot Win The Travers?