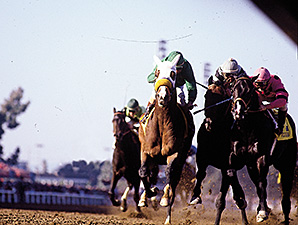 Slugfest at the wire between Wild Again, Slew o’Gold and Gate Dancer in the inaugural Breeders’ Cup Classic at Hollywood Park in 1984. Photo: Breeders’ Cup

Lexington, Kentucky, native Wes Lanter has spent most of his life surrounded by some of the best thoroughbreds of the last generation. The veteran horseman served as both stallion groom and/or stallion manager at the most successful and popular breeding farms in the Bluegrass, including Spendthrift Farm, Three Chimneys and Overbrook Farm, in addition to a pair of separate stints at the Kentucky Horse Park. Over his nearly 30-plus-year career, the 52-year-old has worked with three Triple Crown winners, both thoroughbred and Standardbred, five additional Kentucky Derby winners and multiple champions and Hall of Famers.

A walking encyclopedia of most things thoroughbred racing, Lanter is sharing his favorite stories about the horses whose lives he considers himself privileged to have been a part of throughout his career. Since leaving his position as Equine Section Supervisor at the Kentucky Horse Park’s Hall of Champions in 2015, Lanter has been working on compiling stories about his horses and deciding where his next life chapter will come from. Lanter also is the proud father of 21-year-old Noah, a standout baseball pitcher and outfielder at Ridgewater College in Willmar, Minnesota.

A racing fan to the core, there hasn’t been an important race Lanter hasn’t watched, especially if it included any children or grandchildren belonging to one of his boys. In 1984, Lanter intently followed the road to the inaugural Breeders’ Cup Classic since, at the time, Grade 1 winner Slew o’Gold was representing his great sire Seattle Slew, who Lanter worked with at Spendthrift Farm. Back then, when he watched the slugfest that developed in deep stretch on that October day at Hollywood Park, he had no idea how much a part of his life both Wild Again and Slew O’Gold would become — let alone how they both would become a pair of his all-time favorites or that the two stallions would spend the better part of their stud careers in the very same barn… (more)

Jockeys Do Matter When Handicapping The Breeders’ Cup