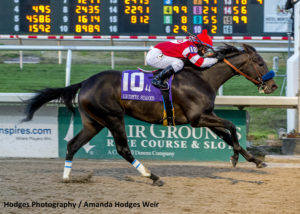 OXO Equine LLC’s Instilled Regard earned his first stakes victory and took his first step toward the May 5 Kentucky Derby (GI) with a handy 3 ¾ length victory from just off the pace in the $200,000 Lecomte Stakes (GIII) at Fair Grounds. The $1.05 million 2-year-old in training purchase is trained by Southern California-based Jerry Hollendorfer and was ridden by fellow Hall of Famer Javier Castellano.

After a clean break from all, Believe in Royalty and jockey Robby Albarado sped to the lead where they… (more)