Home » Kentucky Derby » Give Peace A Chance In Robert Lewis

Give Peace A Chance In Robert Lewis 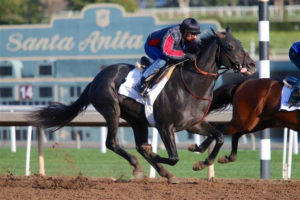 A field of nine newly turned 3-year-olds, none to have yet reached the winner’s circle as a stakes winner, will line up and face the starter in Saturday’s $150,000 Robert B. Lewis Stakes (GIII) at Santa Anita, the second main prep on the Southern California racing calendar with implications for the first Saturday in May, as the winner will collect 10 valuable points toward making the starting gate under the Twin Spires.

In 2007, the Santa Anita Derby (GI)/Kentucky Derby (GI) prep once known as the Santa Catalina Stakes was renamed the Robert B. Lewis Stakes (GIII) to honor one of the most beloved owners in the game of thoroughbred racing who passed away the year before. The familiar green and yellow silks representing Lewis and his wife Beverly and created in homage to the pair’s alma mater, the University of Oregon, were carried by some of the most accomplished runners of the past two decades, including dual classic winners Silver Charm and Charismatic (also the 1999 Horse of the Year), champions Serena’s Song, Orientate and Folklore, just to name a few.

The Robert B. Lewis was… (more)

The Michelle Nihei Story: From Neuroscientist To Racehorse Trainer

Six Square Off In Aqueduct’s Withers