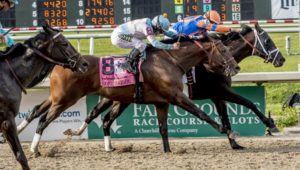 WinStar Farm and Repole Stable’s Noble Indy punched his ticket into the starting gate for the Kentucky Derby with a neck victory in the $1 million Louisiana Derby (GII) at Fair Grounds Race Course. The 3-year-old Todd Pletcher-trained son of Take Charge Indy earned 100 points for his initial stakes victory and added to the 10 he earned for his third-place finish in the Risen Star Stakes (GII) last out and currently sits atop the points standings with 110 — 46 more than West Coast division leader Bolt D’Oro’s 64.

After the break, Hall of Fame jockey John Velazquez placed Noble Indy just behind and to the outside of the early pace of :22.97 and :46.64 set by 99-1 outsider Marmello. After a half-mile the frontrunner… (more)

Race Of The Week: Louisiana Derby