China Horse Club, Head of Plains Partners, Starlight Racing and WinStar Farm’s Justify may have been a bit late to this year’s Kentucky Derby (GI) party, but proved he certainly should be one of the guests of honor after winning the $1 million Santa Anita Derby (GI) by three easy lengths. Under regular jockey Mike Smith, the Bob Baffert-trained son of the late, great sire Scat Daddy let at every call through splits of :23.96, :47.85, 1:12.61 and 1:37.02 and though briefly challenged by runner-up Bolt D’Oro in mid-stretch, continued on strongly, if not a little greenly, to the wire to claim the victory in a final time of 1:49.72 over a fast main track.

In his stakes debut, the flashy colt earned 100 points to guarantee a start in the May 5 Kentucky Derby (GI). His record now stands at 3-3-0-0, $666,000. He must now face the infamous “Curse of Apollo” and defy history to become the first Derby winner who was unraced as a 2-year-old since Apollo in 1882.

“He rides with room to grow,” Smith said. “He’s learning and it’s the first time he rides with the infield open, I don’t know if… (more)

Good Magic Back In Top Form For Blue Grass Score 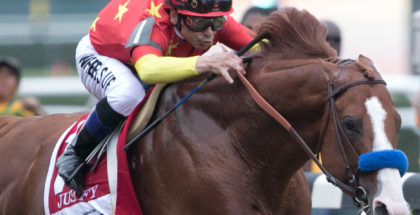