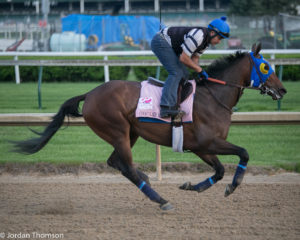 The $200,000 Summertime Oaks (GII) will be run for the fifth time at Santa Anita Park on Saturday after being transferred from Hollywood Park when it closed in 2013. Formerly known as the Hollywood Oaks, the race kept its 1 1/16-mile distance as well as its prestige for California-based 3-year-old fillies.

Since it was first contested and won by MGM studio head Louis B. Mayer’s Honeymoon in 1946, a number of good fillies have taken down the top prize in this event, including A Gleam, Fran’s Valentine, Gorgeous, Hollywood Wildcat, Lakeway, Sharp Cat, Manistique, Affluent, Adoration and Songbird. This year, six will head postward in search of a spot on that winner’s list, only one having previously achieved a victory in graded stakes company.

The hot California weather from earlier in the week has subsided a bit, giving way to pleasant temperatures. No rain is in the forecast with the afternoon high reaching into the lower 70s. The main track at Santa Anita will be fast and the turf course firm. The Summertime Oaks has been carded as the day’s sixth race with a post time of 3:00 p.m. PT.