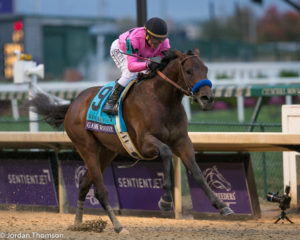 When Triple Crown winner Justify retired to stallion duty this past summer, his absence left a significant void in the daily operations of Hall of Fame trainer Bob Baffert’s barn. The empty stall on the corner of barn five at Santa Anita, which also housed American Pharoah three years earlier, a constant reminder of a journey to the summit in thoroughbred racing unfortunately cut short by injury or the lure of a lucrative stud deal.

So, when Baffert instructed his staff to put a plain bay 2-year-old son of Candy Ride in that stall, just about everybody should have noticed. That colt, now named Game Winner, became Baffert’s fourth career Breeders’ Cup Juvenile (GI) winner with his impressive 2 ¼-length victory in the 35th running of the event at Churchill Downs on Friday and earned his rightful position as the leading candidate for next year’s Kentucky Derby (GI).

Owned by Gary and Mary West, the grandson of champion Fleet Indian (his dam is the A.P. Indy mare Indyan Giving) capped off a perfect season with four wins and likely the title as 2018’s best juvenile when the Eclipse Awards are handed out in January. He also won the Del Mar Futurity (GI) and American Pharoah Stakes (GI) in addition to his maiden score and has banked $1,506,000. He was bred in Kentucky by Summer Wind Farm and was a $110,000 Keeneland September yearling just more than a year ago.

“When I worked him I remember calling Gary, you know, [and telling him], ‘I think I found a good one,’” Baffert said. “I didn’t think he could win first out and he won going away. I didn’t think he’d show that much speed and he really fooled me that day.

“When he won the Futurity, I knew right then. We talked about it. I said, ‘he’s two races away from a championship maybe.’ So, I’m just glad that the way he ran today and hopefully he sewed up a championship. It’s so satisfying for me to win for Gary and Mary because they have so much passion for the sport and he knows there’s a punch right around the corner and he’s doing great. We have West Coast tomorrow and I told him we’re going to have a big weekend.” 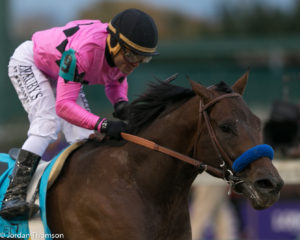 Under jockey Joel Rosario, Game Winner — who was even money at post time — had to work for his victory. After the break he bumped pretty solidly with Knicks Go to his outside. Then, he had no choice but to navigate the clubhouse turn while in the five-path and widest of all, where he stayed all the way up the backstretch and into the far turn. Hard ridden, he slowly made up ground and had just Knicks Go to pass as he barreled down the stretch under a stiff left-handed stick from Rosario.

Inside the final furlong, Game Winner reached even terms with Knicks Go and the pair bumped again before Knicks Go threw up the white flag and allowed Game Winner to continue on to the clear victory.

Baffert said he has no specific Triple Crown campaign set for Game Winner except to say he won’t race again this year, though he won’t exactly be taking a vacation.

“I haven’t really thought about [next season’s plan],” Baffert said. “He’s not going to run again this year. [We’ll] back off. One thing about him, he’s a glutton. He’ll eat everything. He’ll finish everything tonight. Justify was that way — just a big, strong horse. Keep him halfway conditioned. Can’t let him be a couch potato. We’ve been through this so many times, we know what we need to do. Just keep him happy. That’s the way it is. He just needs to stay the way he is.”