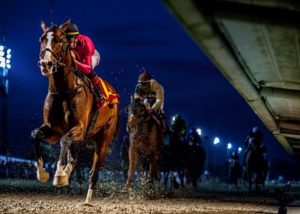 This year’s $1 million Louisiana Derby (GII) at Fair Grounds marks the first of seven Road to the Kentucky Derby races offering 100-40-20-10 points to the top-four finishers, which for all intents and purposes guarantees the winner a spot in the gate in Louisville on the first Saturday in May. With that in mind, the names of 11 runners were dropped into the entry box for Saturday’s nine-furlong test, the final Derby prep event in Louisiana for 2019.

Black Gold (1924) and Grindstone (1996) are the only two to have swept both the Louisiana Derby and Kentucky Derby so far, but horses like 2017 Horse of the Year Gun Runner won in 2016 and joined Risen Star (1988 Preakness and Belmont Stakes winner), Peace Rules, Friesan Fire, Peace Rules and Rushaway in the Louisiana Derby record books.

Risen Star Stakes (GII) winner War of Will is the 6-5 morning line favorite under regular rider Tyler Gaffalione and carries a three-race win streak and the status at the top of the Kentucky Derby points leaderboard with 60. The son of War Front, who was a $298,000 Arqana Breeze Up sale purchase in France last year, is owned by Gary Barber and trained by Mark Casse and broke his maiden in his first dirt try at Churchill around two turns back in November, then followed it up with a four-length win in the LeComte Stakes (GIII) before taking the Risen Star Stakes (GII) last out.

War of Will is out of Visions of Clarity (by Sadler’s Wells), who is a half-sister to 1997 Breeders’ Cup Mile (GIT) winner Spinning World. Visions of Clarity also produced 2010 Vincent O’Brien National Stakes (GI) victor Pathfork and other members of his female family include grade 1 winners Good Journey and Denon.

Risen Star runner-up Country House is back, his connections hoping to turn the tables on the favorite and snatch the win. Owned by the partnership of Mrs. J.V. Shields, E.J. McFadden and LNJ Foxwoods, the son of Lookin at Lucky is trained by Hall of Famer Bill Mott and will be ridden by Luis Saez.

Roiland and Hog Creek Hustle, the third- and fourth-place finishers in the Risen Star, are also back with attempts to better their finishes last out. Roiland was third, beaten 3 ¾ lengths at odds of nearly 70-1, while Hog Creek Hustle was 2 ¼ lengths behind him. Roiland is trained by Tom Amoss, who hasn’t yet won the Louisiana Derby, and will be ridden by James Graham. Hog Creek Hustle will carry Miguel Mena for trainer Vickie Foley.

Trainer Bret Calhoun will send out a pair in Mr. Money (Adam Beschizza) and By My Standards (Gabriel Saez). Mr. Money was seventh in the Risen Star in his first start since a fourth in the Breeders’ Cup Juvenile (GI), while Be My Standard faces winners for the first time after breaking his maiden by 4 ½ lengths over this track last out.

Trainer Todd Pletcher, who is the race’s leading trainer with four winners — Circular Quay (2007), Mission Impazzable (2010), Revolutionary (2013) and Noble Indy (2018) – will tighten the cinch on Wertheimer et Frere’s homebred Spinoff. The son of Hard Spun and the grade 1-winning Gone West mare Zaftig ships in off an impressive 11-length score in a first-level allowance at Tampa Bay Downs a month ago.

Steve Asmussen and Winchell Thoroughbreds, who have previously teamed up to win two Louisiana Derbies with Pyro (2008) and Gun Runner (2016) (the latter in partnership with Three Chimneys Farm), send out a Limonite (Jose Ortiz) and Bankit (Irad Ortiz, Jr.). Limonite was fifth in the Risen Star last out and has yet to win in three starts since breaking his maiden, while a seasoned and well-traveled stakes winner Bankit ships in off a fifth-place finish in the Southwest Stakes (GIII). Hall of Famer Asmussen also saddled Fifty Stars to win here in 2001.

Lemniscate (Brian Hernandez, Jr.) is trained by Kenny McPeek, who won the Louisiana Derby with Repent in 2002. The son of 2000 Louisiana Derby runner-up Exchange Rate broke his maiden in wire-to-wire fashion over the turf at Gulfstream Park last out and jumps up in class here.

The Louisiana Derby is carded as the last of 13 races on Saturday with a post time of 5:13 p.m. CT.