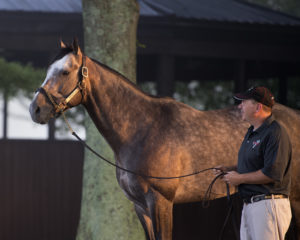 It’s was a beautiful sunny day on April 29, with a gentle Kentucky breeze as Arrogate stood in front of the Juddmonte Farms breeding shed in Lexington. At the same time last year, he was near the end of his first season at stud and now it’s easy to see both time and stallion duty have been good to him — he has filled out and built muscle. Arrogate looks fit, energetic and healthy.

Juddmonte’s stallion manager, Leif Aaron, is more than pleased with how Arrogate has adjusted to his new life.

“He likes to breed and he’s good at it,” Aaron said with a smile as Arrogate held his head high, his gaze pointed toward the road. “He’s looking for a van, he knows it’s time for a mare to be coming in.”

Besides Arrogate’s zeal for breeding, Aaron is also extremely satisfied with the 6-year-old stallion’s first crop of foals so far and believes they are the result of, “the best book ever for a freshman sire, in my opinion.” 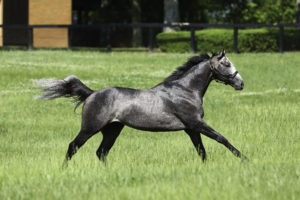 Aaron also explained that demand for Arrogate last year was so high that, “we had to turn down a hundred mares,” a result of Juddmonte’s decision to hold his book firm at around 140 as opposed to other top stallions who breed 200 or more mares in a season.

“We’re still limiting his book,” Aaron confirmed, pointing out that because Arrogate is Juddmonte-owned, “we don’t have to answer to a syndicate or immediately earn back a big purchase price,” which gives the farm more latitude in selecting future mates.

“We want to make it special for breeders to get one (foal) from him.”

Aaron also explained that demand remains high for Arrogate in his second year as a stallion.

“If anything, it’s been even more difficult for people to get a mare in (to breed to him) this year,” Aaron said, citing the untimely death of Pioneerof the Nile at age 12 in March at the height of the breeding season as a contributing factor. “That was a big loss for our industry. It created a shortage for those breeders who wanted an Unbridled-line sire. We’ve been full for about a month now, and unfortunately we’re still turning people away.”

Arrogate’s first foal was a strapping colt out of My Dear Venezuela (by Wildcat Heir), who arrived on January 25 and was followed just days later by the much-anticipated filly out of champion Songbird. Once Arrogate’s foals hit the ground, Aaron explained, breeders were highly impressed by their appearance and demeanor.

“The phone started ringing off the hook,” Aaron recalled. “His foals are short backed, with a good leg, and very racey. They also have a lot of attitude.”

While chatting with Aaron, a groom led out Multiple grade 1-winning millionaire Paulassilverlining (by Ghostzapper), who was acquired by Juddmonte last year specifically to breed to Arrogate, and her first foal by her side. Just two months old, the colt obviously shows a lot of his sire’s physical traits.

“He has a wonderful hip, and similar neck and shoulders to Arrogate,” Aaron explained.

Juddmonte has a broodmare band of about 75 on the Kentucky farm and approximately 20 were bred to Arrogate last year, according to Aaron, with plans to do the same this year. Aaron works aggressively to fill the stallion’s book with quality mares in order to ensure his success with early runners.

“When you have so many top stallions breeding 200 mares or more, competition for good mares is very high, “ Aaron explained. “We work hard to help Arrogate get the mares we really believe will complement him best.”

Aaron then showed a colt out of graded stakes winner Filimbi (by Mizzen Mast), a Juddmonte homebred born within days of the Paulassilverlining colt. Although their dams are very different in conformation, these two foals bear a striking resemblance to one another, proof that Arrogate is “stamping his get.”

“This colt is extremely well balanced,” Aaron pointed out. “We’re excited about both of these foals.”

Back at the breeding shed, Arrogate had an appointment with the gorgeous 7-year-old bay A.P. Sonata (by A.P. Indy), a mare from the female family of Abel Tasman and a $1.1 million Keeneland September sale purchase by Mandy Pope’s Whisper Hill Farm. Afterward, he was set to cover the unraced maiden mare Bow (by Medaglia d’Oro), who most likely will be offered in foal to the stallion at a sale later this year.

With mares like these, along with the many other stakes winners and stakes producers already in Arrogate’s first two books, the future looks promising for the gray son of Unbridled’s Song, and America’s richest racehorse of all time.

What to Wear to Preakness

Arrogate Back in California, Will Get Brief Break... April 3, 2017 | Margaret Ransom 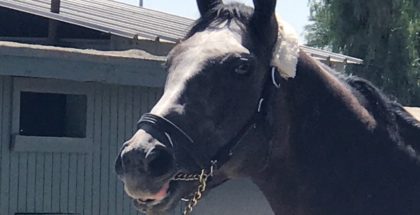 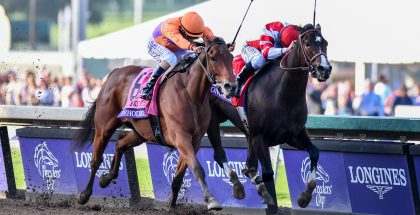