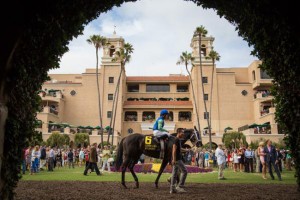 The 80th season of summer racing at the Del Mar Thoroughbred Club in Del Mar, California, gets underway on Wednesday with an opening day card made up of 10 races, including the featured $100,000 Runhappy Oceanside Stakes.

The 36-day Del Mar summer meeting runs through Labor Day, September 3, and features 40 stakes overall worth more than $7.4 million, including 22 graded and six grade 1. Nineteen will be contested over the track’s Jimmy Durante Turf Course, while the other 21 will be offered on its main track, which was returned to dirt in 2015 after eight years as a Polytrack surface.

The Runhappy Oceanside will be contested for the 74th time and has drawn a field of twelve 3-year-olds who will race a mile on the turf. It is the first stop in the track’s sophomore grass series with the $150,000 La Jolla Handicap (GIIIT) the next step and the September 1 $250,000 Del Mar Derby (GIIT) finishing things up. The Oceanside Stakes has traditionally been a popular race and has been split into two divisions 30 times.

In this year’s Oceanside trainer John Sadler will tighten the girth on Hronis Racing’s Irish import Jasikan, who was installed the 9-5 favorite off his first-level allowance win at the distance at Santa Anita back in May. Flavien Prat, who battled Drayden Van Dyke for leading rider a year ago but fell just short in the final days, will ride. Slam Dunk Racing and Old Bones Racing will be represented by their own Irish import in Gregorian Chant, who broke his maiden at first asking at Dundalk last December and has a win and a fourth at nine furlongs since arriving in America. Geovanni Franco takes over for Prat.

Other Oceanside runners to note are Nolde, owner Jerry Moss’s homebred son of Pioneerof The Nile trained John Sheriffs and ridden by Hall of Fame jockey Victor Espinoza on Nolde, who is riding a two-race win streak; Del Secco DCS Racing’s stakes winner King of Speed, who is trained by Jeff Bonde and will be ridden by Kent Desormeaux; and CTR Racing, Quatar Racing and Steven Keh’s Legends of War, who is trained by Doug O’Neill and will be ridden by Rafael Bejarano. 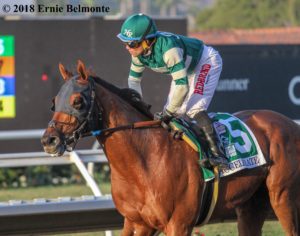 The feature event of the season is the 29th running of the $1 million Pacific Classic on Saturday, August 17. Sponsored again this year by TVG, the race boasts some amazing past winners, including fan-favored gelding Best Pal, who won the inaugural 1991 running; and Bertrando (1993), Candy Ride (2003), Lava Man (2006), Shared Belief (2014), Beholder (2015) and California Chrome (2016). Last year champion Accelerate won the 10-furlong event en route to a win in the Breeders’ Cup Classic (GI) in the fall.

The first graded stakes of the meet have been scheduled for opening weekend, with the $200,000 San Diego Handicap (GII) and $200,000 San Clemente Stakes (GII) on Saturday and the $250,000 Eddie Read Stakes (GIIT) on Sunday. The San Diego Stakes is the main local prep for the Pacific Classic while the San Clemente spotlights the local 3-year-old turf fillies and is a prep for the August 17 Del Mar Oaks (GIT).

The Eddie Read is the signature event for older local turf horses and is an early prep for the August 17 Del Mar Handicap (GIIT) on August 17.

First post daily is 2 p.m. PT with the exception of the 4:oo p.m. for all “Four O’Clock Fridays.”