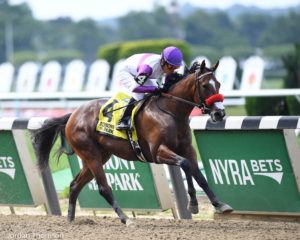 A field of seven 2-year-olds are set to race six furlongs in Saturday’s $200,000 Best Pal Stakes (GII) at Del Mar, the winner claiming the title as the West Coast’s top juvenile and leading contender for the September 2 Del Mar Futurity (GI).

Formerly known as the Balboa Stakes, the Best Pal honors one of the Golden State’s most beloved runners who won this race in 1990 before going on to become the richest California-bred of all time when he retired in 1996 with earnings of $5,668.245. Now only Horses of the Year California Chrome and Tiznow rank higher on the all-time Cal-bred earnings list.

Since Best Pal’s win 29 years ago, some good horses have claimed the title of Best Pal Stakes winner, including 2015 champion juvenile and 2016 Kentucky Derby (GI) winner Nyquist, who was trained by Doug O’Neill.

This year O’Neill sends out a pair of runners led by Reddam Racing’s Fore Left, who is undefeated in two starts, including the Tremont Stakes at Belmont Park on June 7 most recently. The son of Twirling Candy, who was purchased for $97,000 as a yearling at Keeneland in September 11 months go, will have Mario Gutierrez aboard.

O’Neill, who in addition to Nyquist has two other winners of this race to his credit, will also tighten the girth on Pappas Horse Racing Corp and Charles Bartlett’s Raging Whiskey, who was a private purchase after he broke his maiden at Santa Anita by 2 ½ lengths in gate-to-wire fashion in early June. The son of Bourbon Courage most recently was third in the Sanford Stakes (GIII) at Saratoga last month and will be making his fourth career start. Jockey Abel Cedillo has been tapped to ride for the first time.

Hall of Famer Bob Baffert, who has saddled a record eight winners of this race, will send out a maiden this year in SF Racing, Starlight Racing and Madakat Racing’s We’re Still Here. The $270,000 Union Rags colt has earned two seconds in two outs at 4 ½ furlongs and 5 ½ furlongs and is certainly bred to like more distance. Leading jockey Drayden Van Dyke, who rode Instagrand to victory in this race a year ago, rides.

Kaleem Shah Inc.’s Schrodinger, who was a $550,000 2-year-old in training at the Ocala Breeders’ Sales five months ago, broke his maiden at first asking at Los Alamitos in wire-to-wire fashion in late June and makes a logical step into graded company here. He has been training exceptionally well under the tutelage of Simon Callaghan and has a ton of room to improve off his maiden score. Jockey Flavien Prat, who had his choice of three here, seeks a second career Best Pal win.

The Pete Miller-trained Wrecking Crew broke his maiden in his debut over the Del Mar track, rallying from a slow break and a mid-pace trip to win by 1 ¾ lengths on July 27 and makes a second career start here. Mike Smith will ride the $875,000 son of Sky Kingdom for owners Rockingham Ranch and David Bernsen.

Collusion Illusion, who will be ridden by Joe Talamo, also had a nice maiden win over the Del Mar main track when scored impressively in his debut by a half-length. The Twirling Candy colt is trained by Mark Glatt and Talamo will be aboard once again.

Thanks Mr. Eidson broke his maiden in his third start by a whopping 9 ½ lengths under jockey Norberto Arroyo Jr. wearing a $150,000 price tag. The More Than Ready colt is trained by Jeff Bonde.