Home » News » Point Of Honor, Ulele Square Off In Alabama

Point Of Honor, Ulele Square Off In Alabama 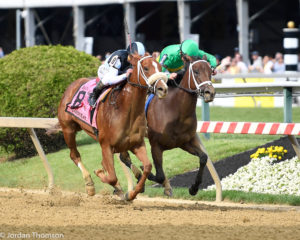 After Point of Honor won a thrilling stretch-drive duel against Ulele in the Grade 2 Black-Eyed Susan in May at Pimlico, the two talented foes will rematch as part of an accomplished nine-horse field of 3-year-old fillies in the Grade 1, $600,000 Alabama presented by NYRA Bets on Saturday at Saratoga Race Course.

Eclipse Thoroughbred Partners and Stetson Racing’s Point of Honor has been stabled at Saratoga since June and took to the track in impressive fashion when she ran second to undefeated Guarana by a length in the 1 1/8-mile Grade 1 Coaching Club American Oaks on July 21.

The George Weaver trainee earned a career-best 91 Beyer Speed Figure for the runner-up effort, building on the 90 she earned by edging Ulele by a half length at 1 1/8 miles in the Black-Eyed Susan the day prior to the Preakness on a fast track. Through her first five starts, the Curlin filly has won three times, including a win in the Suncoast on February 9 at Tampa Bay Downs, with her only off-the-board effort coming with a fourth-place finish in the Grade 2 Gulfstream Park Oaks on March 30.

“She’s had a good four weeks and she’s been training good. We’re happy with her,” Weaver said. “She’s not a difficult keep. She’s remained happy all year. She likes it here, but she liked it in Florida and liked it in Kentucky [too].”

Bred in Kentucky by Siena Farms, Point of Honor burst on to the scene with a six-length win as a juvenile on December 16 at Gulfstream in a 1 1/16-mile route taken off the turf. Placed into stakes company in her 3-year-old bow, she cruised to a 2 ¾-length win in the Suncoast and followed the Gulfstream Park Oaks by handling the stretch out in distance in the Black-Eyed Susan. She will now be running at the Alabama distance for the first time.

Under Hall of Fame jockey Javier Castellano, who had the mount in all four of her stakes starts, Point of Honor breezed five furlongs in 1:05.82 on the Oklahoma training track on August 9. Castellano, a three-time Alabama winner, will have the return call on Saturday from post 7.

“She’s bred to handle it and this is the race we’ve had in the back of our minds for several months now,” Weaver said. “It’s going to be up to her and Javier to figure out how to get the win. She was second in the Oaks last time. She has to go get it done, but it’s something we’re looking forward to.

“Javier worked her the other day and the time was slow, but he thought she felt good underneath him. She’s never has been a horse who has worked particularly fast, so I’m not too concerned with the time of the workout,” he added. “She came out of it well and I expect her to run her race.”

Cheyenne Stables’ Ulele is coming off a pair of tough-running seconds, building on the Black-Eyed Susan by running second to fellow Alabama entrant Lady Apple by a half length in the Grade 3 Iowa Oaks on July 5 at Prairie Meadows.

Trained by Brad Cox, Ulele broke her maiden at third asking on January 27 at Oaklawn and made her stakes debut an impressive one in the Black-Eyed Susan when she outkicked pacesetter Cookie Dough by 2 ¼ lengths for second in the longest race she’s contested in seven career starts.

In the Iowa Oaks, she set the pace for the six-horse field through the half-mile mark and dug in in the stretch before Lady Apple hit the wire first. The daughter of Candy Ride will now make her first start at the Spa, drawing post 6 with Joel Rosario picking up the mount.

Peter Brant’s Dunbar Road, winner of three of her first four starts, will be back in action for the first time since capturing the Grade 2 Mother Goose on June 29 at Belmont for trainer Chad Brown. A Quality Road filly, Dunbar Road, purchased for $350,000 at the 2017 Keeneland September Sale, will run at Saratoga for the first time, drawing post 1 with Jose Ortiz.

Brown, a three–time Eclipse Award-winning trainer, is looking for his first Alabama win, with Dunbar Road a formidable challenger. Making her first start on March 3, she cruised to an 8 ¾-length win at Gulfstream and ran second to Alabama-contender Champagne Anyone in the Gulfstream Park Oaks. Her three wins are by a combined 16 ¾ lengths.

Lady Apple has been training at Saratoga since the Iowa Oaks win in which she registered a personal-best 88 Beyer, working four times on the Oklahoma main track, including a four-furlong breeze in 50.10 seconds on August 11.

Bred in Kentucky by KatieRich Farms, who co-owns the Curlin filly along with Phoenix Thoroughbred III, Lady Apple is 4-2-1 in nine starts, including a stretch of three straight wins culminating with a one-length score in the Grade 3 Fantasy on April 12 at Oaklawn.

Lady Apple made her first start against Grade 1 company in the Kentucky Oaks, running third behind Liora and the winner Serengeti Empress in the “Lilies for the Fillies” on May 3 at Churchill on the eve of the Kentucky Derby.

Paul Pompa Jr.’s Off Topic is coming off a personal-best 88 Beyer for her third-place showing in the Coaching Club American Oaks. No stranger to facing the high-caliber competition, Off Topic was third in the Grade 2 Gazelle on April 6 at Aqueduct, starting three straight high-level stakes at 1 1/8 miles that continued with a fifth in the Black-Eyed Susan before her Saratoga bow last month in which she tracked the speed and finished strong to earn blacktype for trainer Todd Pletcher.

A daughter of Street Sense, Off Topic has made all eight of her starts on fast tracks, with her last seven coming in races contested at 1 1/16 miles or farther. Manny Franco, aboard for the Coaching Club American Oaks, will have the call from post 8.

Graded stakes-winner Champagne Anyone has been knocking on the door for Grade 1 success, finishing fourth in both the Kentucky Oaks and the Coaching Club American Oaks. Trained by Ian Wilkes, Champagne Anyone won the Gulfstream Park Oaks and has never run worse than fourth in six previous graded stakes appearances. Chris Landeros will ride from post 4.

Street Band, winner of the Grade 1 Indiana Oaks by 3 ½ lengths last out on July 13, for trainer Larry Jones, drew post 5 with jockey Sophie Doyle, aboard for both of Street Band’s graded stakes victories, including the Grade 2 Fair Grounds Oaks on March 23.

Rounding out the field is Kelsey’s Cross, looking for her first stakes win for trainer Patrick Biancone [post 9, Rajiv Maragh]; and Afleet Destiny, conditioned by Uriah St. Lewis who was the runner-up in the Grade 2 Demoiselle to cap her juvenile campaign in December at the Big A [post 3, Anthony Salgado]. 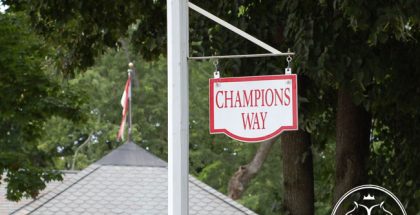 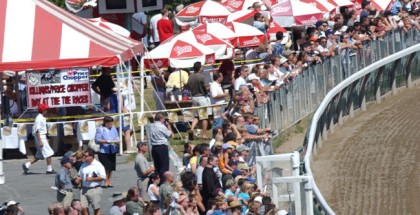 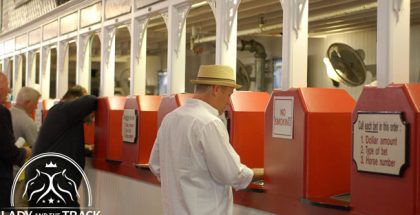