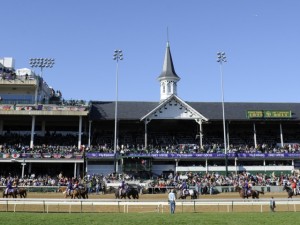 This Friday Churchill Downs in Louisville, Kentucky, kicks off its annual boutique September meeting, presented by Commonwealth Technology, with a tremendous 10-race card loaded with rich purses, full entries and wagering options for every kind of horse player. The meeting lasts just 11 days and runs through Sunday, September 25.

This season’s average single-race purse has reached a record $76,275, largely due to the addition of historical racing machines, which debuted a year ago at nearby Derby City Gaming. Overall a record $8.314 million in purses are on offer over the three weeks, including bonuses from the Kentucky Thoroughbred Development Fund, which amounts to an average of $756,000 per day.

Eight stakes races worth $1.375 million will also be up for grabs over the three weeks, including two Breeders’ Cup Challenge “Win & You’re In” events – the $200,000 Pocohontas Stakes (GII) for 2-year-old fillies, the winner guaranteed a spot in the Juvenile Fillies; and the $200,000 Iroquois Stakes (GIII) for 2-year-old colts and geldings, the winner securing himself a spot in the Juvenile field. Both races will be held on Saturday, September 14.

In addition to the standard straight win, place and show wagering, exactas, trifects and superfectas, rolling daily doubles, pick threes and pick fours, the popular Super High Five is back for another season and is offered on the last race every day.

A total of 103 horses and 10 also-eligibles areset for Friday’s opener for an average of 10.3 horses per race. Additionally, Friday’s 10-race card features a trio of allowance races and three maiden special weight events.

Twelve For 150th Travers At Saratoga