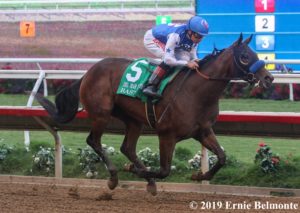 Baoma Corp’s Del Mar Debutante (G1) winner Bast was labeled the early 3-5 favorite in a field of six juvenile fillies in Friday’s $300,000 Chandelier Stakes (GI), a Breeders’ Cup “Win and You’re In” Challenge race guaranteeing the winner a spot in the gate for the Juvenile Fillies over the same track on November 1.

Historically, the Chandelier Stakes – run as the Oak Leaf Stakes until 2012 – has produced some of the most recognizable names in the juvenile fillies division, nevermind older fillies and mares division. Names like Bellafna, Moonshine Memories, Songbird, Blind Luck, Stardom Bound, Sweet Catomine, Halfbridled, Composure, Excellent Meeting, City Band, Serena’s Song, Phone Chatter, Pleasant Stage, Lite Light, Sacahuista, Life’s Magic, Landaluce, Bold ‘n Determined, It’s IN the Air and others not only added their names to the history books for this race, but also the annals of horse racing excellence.

This year a talented field will attempt to add their names to the esteemed winners list, including Bast. The dark bay daughter of Uncle Mo, who was a $500,000 Keeneland September yearling, is trained by the race’s leading conditioner in Bob Baffert, who seeks to saddle a record 11th winner, and is bred to love distance of her first two-turn event, and even farther. She and has a nice tactical ability jockey John Velazquez, who flies in from New York for the day especially to ride her and a stablemate, can use depending on how the pace sets up.

Jeff Mullins will tighten the girth on Karl Pergola’s K P Dreamin in her stakes debut after the $170,000 daughter of Union Rags broke her maiden in her second start at Del Mar a month ago. The plus for that victory is that it was around two turns and she most certainly has the pedigree to handle extra distance. Regular rider Ruben Fuentes will be back aboard.

KMN Racing’s homebred Been Studying Her makes her first start in the name of Dan Ward, who takes over for the banned trainer Jerry Hollendorfer, and the California-bred daughter of Fast Anna brings a win in the Generous Portion Stakes at Del Mar with her into her first graded attempt. She is another making a first stab at two turns, but she’s got a running style to suggest she will handle the added distance just fine. Mike Smith is back aboard.

The field for the Chandelier Stakes, in post position order with jockeys and morning line odds, is: